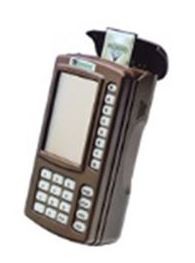 In this blog we look at current compatibility and delve into a bit of history!

The first John Deere terminal we worked with at SOYL was the original Greenstar, often referred to as "the brown box". We first sent SOYL application maps to this terminal in 2003.

Back then, application maps were made in our own precision agronomy software and then imported into Farmade (now Farmplan) GateKeeper. This was the only software at the time that could be used to write data to the original Greenstar. We had a special Gatekeeper license which at one time had well over 300 clients set up within it so we could look after our clients working with John Deere equipment.

Data cards for the original brown box were in 'PCMCIA' (Personal Computer Memory Card International Association) format measuring roughly 8.5cm by 5.5cm. This is huge by today's standards! Remarkably, even today, we still have a small number of customers using the original Greenstar for their variable rate applications.

The next Greenstar terminal was GS2 – 2600 which used the smaller compact flash cards. Again, variable rate (VR) maps had to be loaded via Gatekeeper.

The Greenstar 2600 was a true game-changer in the field of agricultural electronics combining robustness, functionality and a lovely large colour screen.

In late 2010, a version of the Greenstar 2600 was launched that could import shape file application maps directly into the terminal. This saved the processing step through Gatekeeper and allowed for more efficient in field operations. At the time we provided special documentation to help customers use shape file application maps with the 2600 unit. 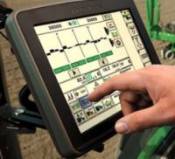 The 2630 was launched as an ISOBUS 'VT' – Virtual Terminal – for use with a list of ISOBUS compatible implements. (ISOBUS is the universal protocol for electronic communication between implements, tractors and computers). It was still possible to connect Serial (RS232) controllers using the 'Field Doc' cable accessory. This enabled connection to many existing and compatible spreader, sprayer and drill controllers.

The latest Greenstar terminal is the GS4 (Gen 4, 4600) which is a fully functioning ISOBUS Virtual Terminal and follows the trend where certain levels of functionality are purchased as additional software licenses.

GS4 does not work through traditional RS232 connectivity yet is compatible with SOYL maps but only if correctly licensed and connected to an ISOBUS compatible implement. The GS4 provides a customisable and flexible experience for operators and an extensive range of features.

Greenstar terminals were, and continue to be, a key part of the UK's precision farming success story. For a huge number of farmers Greenstar was their first use of GPS paving the way for many to take up and gain value from variable rate fertiliser and seed.