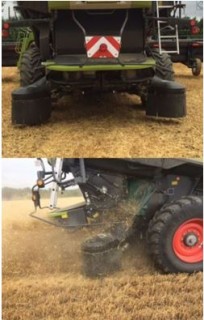 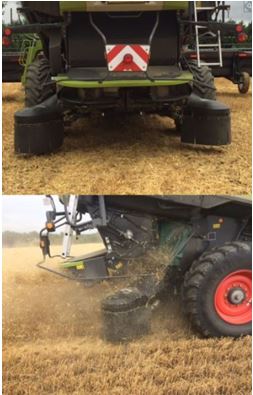 Controlling black-grass in a rotation is a regular topic of conversation for many farmers – looking at how to best maintain, control and, more importantly, get on top of black-grass. After decades of research across the industry and experts recommending key steps on how to master the spread of this prolific weed, the simple answer is that sadly there is still no "silver bullet". However, there are lots of control measures that can be adopted to help. This invariably means changing cropping rotations, a shift in mind-set, possibly a reduction in margin/ha but most of all a greater level of attention to detail right across the cropping rotation.

What's new and potentially different in the market place?

Frontier, in conjunction with EW Davies farm in Essex, Rothamsted, AHDB and Primary Sales from Western Australia, is reviewing the chaff liner which is a bolt on attachment to the combine. It was developed to manage the major issue of glyphosate resistance to ryegrass in Australia (and we think we've got problems!). The idea is simple, remove the chaff spreaders and bolt on two hydraulic belt driven conveyors this places all the chaff behind the rear wheels in two neat rows.

Sceptics pointed to all the reasons this might fail in Western European conditions which are somewhat different from those our colleagues in Oz enjoy.

This has proved not to be the case.

With chaff deck attached to a Lexion 780 with 12m Macdon header, farm manager Jeremy Durrant has thrashed his way through 1,250 hectares in harvest 2017 across winter wheat, OSR, spring and winter barley, spring and winter oats, linseed and beans with not a single block or issue.

So what, you might think. Firstly, this demonstrates that the kit works in UK conditions. Then you ask, so what happens next? The principle is that as you harvest the crop you are collecting the weed seeds and merging them with the chaff prior to dropping them onto straight lines behind the combine. The straw can then be chopped over the top or baled behind. Evidence suggests that at harvest, 90% of brome and ryegrass, along with 30-50% of black-grass seeds are still on the ear. Jeremy runs a CTF operation with everything on 12m spacings so the chaff is dropped in the same rows each year building up and breaking down the seed bank.

You may say, I don't run a CTF so it's no use to me. Wrong! Half the farmers in Oz are on CTF with the others adopting the system and carrying out some form of cultivations, often working at 45% to the direction of combining. This is not an issue as the seed sits in chaff which is not spread by shallow forms of min till. There is one key requirement, however, for non CTF growers. The same combining lines must be maintained year on year to place the seed in the same place, reducing the spread of seed across the whole field.

So what next? There should be evidence of success based on plant counts before and after harvest where the trial has included chaff lining versus standard farm practices and we'll continue to build trials data.

Will this system eliminate grass weeds altogether? It's probably not the silver bullet we all dream of but coupled with chemical and cultural measures, it's an extra tool to the armoury.

More posts from author
Tuesday, 10 October 2017 Controlling black-grass with a cultural method - is that possible?