Although the 'beast from the east' has now left us, it certainly made an impact in Herefordshire by bringing with it a blanket of snow and -5 temperatures, not least with the chaos it caused across the country. Because of this, it's not surprising that input discussions and fertiliser recommendations were put on hold.

However, ahead of the storm we managed to walk some wheat crops in Worcestershire which resulted in the discovery of yellow rust within a crop of Reflection winter wheat.

As new races of yellow rust have been confirmed in recent years it is important to monitor all varieties, even those with high yellow rust resistance.In 2016, there were several varieties that broke down to yellow rust and consequently had their resistance ratings changed. Amongst these were Britannia (8 to 4), Zulu (9 to 5) and JB Diego (7 to 5).

I recommend that you pay particular attention to early sown crops and when we experience cool and damp conditions, which is ideal for yellow rust to develop. 2016 was a year of change when two new yellow rust races were found and identified; Red 24 and Blue 7. In 2017, several new pathotypes (Red 27 to Red 30) were identified but as yet the potential of these on UK wheat varieties is unknown. Red 30 is similar to isolates detected in Morocco and Sicily, which caused widespread epidemics in Morocco last year.

Seedling resistance is now very limited. There are only a few varieties that are resistant to yellow rust at a seedling stage and have adult plant resistance; KWS Siskin, KWS Crispin and Costello. 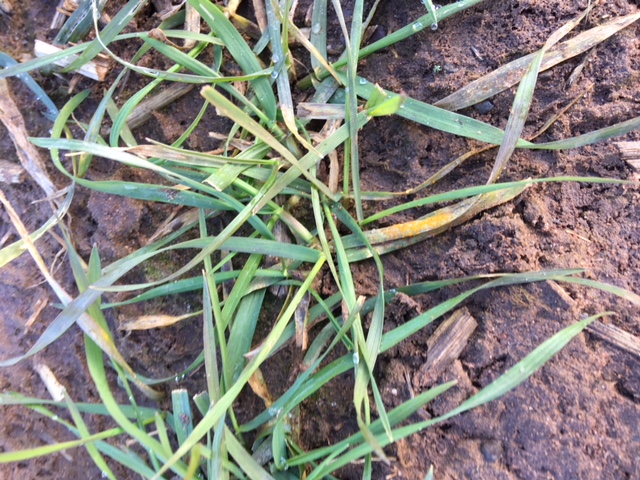 Regardless of the cold temperatures, yellow rust will still be present in the crop and will develop as soon as the weather allows.To control yellow rust it is important to treat the crop at the first available opportunity. This can be done by applying an azole fungicide i.e. tebuconazole or epoxiconazole.Alternatively, a strobilurin i.e. pyraclostrobin will provide good control but only if applied in a protectant situation. Appropriate rates will need to be applied according to disease pressure/variety/ timing etc.

As races change it is important to choose a variety that either has seedling resistance or has a high level of adult plant resistance.

Some of us will remember Slejpner, most of us Brigadier and Oakley and all of us Reflection - be vigilant and monitor all varieties.