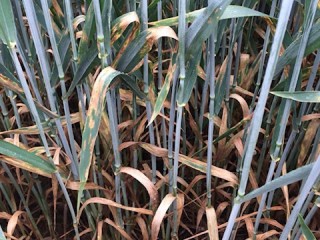 There are no "blue prints" when it comes to cereal fungicide strategies. In fact, all plans should be under constant review based on risk assessment, factoring in variety, drilling date, weather, geography and spraying capacity.

One legacy of the winter we are just coming out of is that crops vary significantly, both in terms of growth stage and current levels of disease. Generally, septoria pressure is low due to so many crops being drilled much later, but the disease can still be found as a result of the mild, wet winter. In the worst-affected varieties, it is currently being assessed at 15% infection, as shown in Plate 1. If we have a wet spring, septoria levels could build very quickly and this will need to be managed appropriately to ensure crops achieve their full potential. 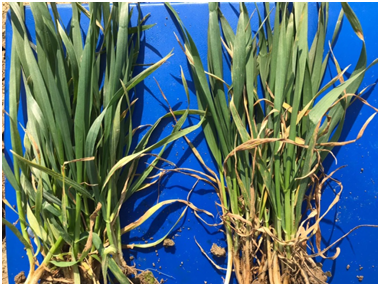 Yellow rust is also being reported in numerous varieties; even those which showed good levels of resistance at the seedling stage.

Keep in mind that the latest information coming out of UK Cereal Pathogen Virulence Survey | NIAB indicates all varieties are susceptible at the seedling stage to at least one race, except Costello, KWS Crispin, KWS Parkin, KWS Siskin, Theodore and RGT Saki. The Recommended Lists | AHDB ratings for yellow rust are based on adult plant resistance which, generally, will not fully express itself until around flag leaf emergence.

Looking at Frontiers's winter wheat fungicide variety interaction trials from 2018/19, the mean response to fungicide + PGR across eight sites was 2.4t/ha – highlighted in Figure 1. This ranged from 5.36t/ha on KWS Kerrin to 0.4t/ha on KWS Extrase.When you look at KWS Extase more closely (scores a 9 for yellow rust and 8.1 for septoria), the mean response to fungicides was 1.19t/ha (range 0.4 – 1.81t/ha).

While better genetics offer some opportunity for cost savings, they still need protecting by using an appropriate fungicide programme; for example, SDHI/Azole/multi-site mix at T1, and either the same or an appropriate rate of 'new chemistry' (Revysol® - see below) at T2.The true benefit that better genetics affords is that they allow for delayed spray timings.

When it comes to the critical T2 spray timing, with 65% of the final yield coming from leaf 1 and the ear – and accepting low leaves may have a bigger contribution this year on thinner, later-sown crops – the best chemistry that is available should be considered.

NOTE: the grace periods following the revocation of epoxiconazole have now been published: 31st October 2020 for sale and supply followed by a 12-month 'use up' period. 2020 will also be the last season of use of chlorothalonil, with its last legal use date set as 20th May 2020. This will leave a significant hole to fill, not just in terms of septoria control in wheat and ramularia in barley, but also resistance management. There are, however, alternative multi-sites: for example, Folpet and Mancozeb.

On a positive note, we do have new chemistry in the form of Revysol® available for this season. In trials last year (Figure 2) on a susceptible variety for septoria (KWS Barrel 4.3) under relatively high pressure conditions, control from the new chemistry was excellent. While yellow rust control is not quite at the level afforded by epoxiconazole, it can be supported by adding in a strobilurin e.g. pyraclostrobin.

Inatreq™ has recently been approved in France and Ireland too, so fingers crossed we will soon have it available for use in the UK as it will be another welcome addition to the armoury. 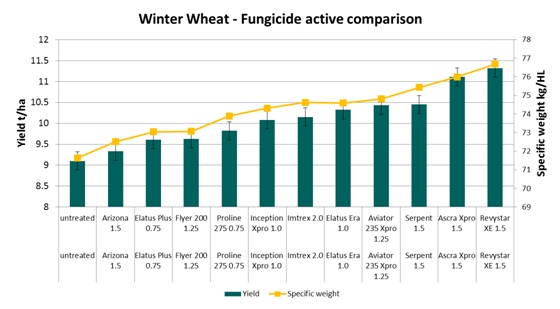 For more information on anything above, please speak to your Frontier contact or get in touch.