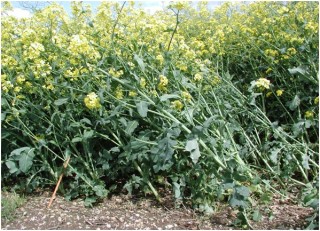 Lodging is described by Berry, 1998 as "The permanent displacement of plant stems from the vertical" which "occurs on average once every four years in UK wheat crops, when it reduces the yield and bread-making quality of grain." Fischer and Stapper, 1987 also report that "Lodging can reduce yields from 7 – 35%, with the greatest yield reductions occurring when lodging occurs within 20 days after anthesis."

The risk of lodging is dependent on a number of factors, including varietal susceptibility, yield potential, the size of the canopy and the weather. However, it is also influenced by soil type, sowing date, residual soil nitrogen, over winter temperatures and seed rates. You can see examples of varietal susceptibility and lodging in the image below.

Plant growth is regulated by a balance of different hormones including cytokins, gibberellins, auxins, ethylene and abscisic acid.Plant growth regulators (PGRs) can be used to manipulate these to modify growth.Modern day PGRs influence the balance of gibberellins or stimulate the release of ethylene within the plant.As day length increases, this triggers an end to 'foundation' growth stages and an increase in the biosynthesis of gibberelic acid which stimulates cell division and elongation.PGRs that can alter gibberellin biosynthesis may also increase the levels of cytokinins, lower ethylene levels and increase abscisic acid levels as shown by Rademacher, 2000.

As a result of altering these other hormone levels in the plant, there are numerous side effects associated with gibberelic acid biosynthesis inhibitors. These include delayed senescence, increased resistance to environmental stresses and shifting assimilates to the roots which then leads to increased cytokinin formation.

The table below highlights the natural hormones that occur within a plant and how they impact growth:

​Plant growth regulators can be grouped in relation to their biological effect. Chlormequat chloride and mepiquat chloride both inhibit early stages of gibberellin biosynthesis, whereas prohexadine calcium and trinexapac-ethyl both inhibit the later stages. Ethephon (2-chloroethylphophonic acid) blocks auxins and triggers the release of ethylene.

What is the PGR strategy for this spring?

Manipulating canopies as we approach stem development (BBCH 30) is influenced by the timing and amount of nitrogen applications, early season disease control in order to prevent loss of tillers, and by the use of PGRs.

Mitigating root based lodging is all about increasing root plate spread and depth. Clearly, soil type and condition also have a key influence.On forward wheat crops, split applications based on BBCH 30 and then again at BBCH31-33 have proved to be very effective.On backwards crops where we are looking to maximise tiller numbers, a slightly longer split starting mid-tillering has worked well.However, check that specific labels support use pre-BBCH30.

Key PGR timings and what we are trying to achieve:

In summary, effective canopy management is an essential part of building yield.Maximising shoots/m2 is a fundamental building block of yield, as is optimising the plant population in order to maximise light interception and the utilisation of available nutrients.Understanding varietal weakness and the crop's potential enables the PGR programme to be tailored to meet specific needs.

PGRs are an insurance and, in some years, retrospective analysis may suggest that their use may not be justified.However, with yield losses of up to 35% possible one year in four, the benefits of using them are clear.