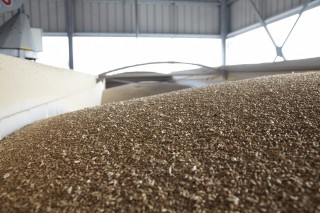 US wheat futures have traded down to six-week lows. This is partly due to poor US export figures but, for the most part, is lead by politics. A two-month high in the US dollar is weighing on US wheat, as are falling equity and crude oil markets.

A number of weather issues have been impacting grain markets but these are now well accounted for and more or less factored into current price levels.

Canada's spring wheat harvest is progressing after all the issues caused by cold and snowy conditions. Now, the forecast gives warmer, dryer weather for the coming week.

Argentina had been expecting to harvest a near-record wheat crop of around 21 million tonnes but their prospects have been damaged by adverse weather. Production estimates there have now been dropped to 19 million tonnes. Harvest is just beginning, with around 2% of the crop cut.

The forecast in Australia remains dire, with more dry weather expected in the next two weeks. Wheat production will be significantly down and this will be compounded from a global point of view by the necessity to keep grains within the country. This is to feed to livestock after forage was decimated by the prolonged drought and will keep grains away from the export markets.

Russia is the best hope of a price rally at the moment. As of the end of September, their wheat exports had already accumulated to almost 13 million tonnes. They are expected to add another four million to this by the end of October. This would mean that in just three months, they will have shipped almost half of their estimated annual exportable surplus. This does little to dispel ideas that they could need to restrict exports in the latter part of the season to protect stock levels and domestic values. The Russian government will meet with exporters tomorrow so this will be closely watched.

At the start of the week, lacklustre global markets and stronger sterling weighed on UK values. This negative tone was given further impetus on Tuesday, with news breaking that the Ensus ethanol plant in Teeside would pause production at the end of November "due to the difficult market conditions."

The announcement follows the Vivergo ethanol plant confirming its permanent closure and the news of Hovis, who recently sold mills and closed processing at the Southampton plant altogether. None of these developments were predicted at the beginning of this season and they each now represent reduced UK wheat demand.

Other UK consumers have good cover through to the new year which makes any short term price rally look unlikely without a fresh story to shake things up again.

The leading triggers for potential price rallies are largely linked to politics. Sterling can be expected to remain volatile as we push through the next few months of Brexit negotiations and a weaker pound would support wheat prices.