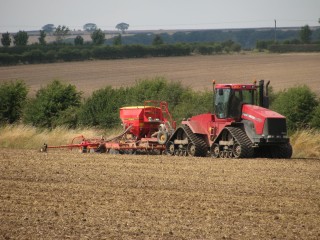 OSR: The importance of early nutrition As we progress through harvest and get into August, one of the next jobs for many will be thinking about drilling oilseed rape. Establishing OSR can be a real challenge and that concern will likely be even greater following the remarkably prolonged hot and dry weather spell we've been experiencing across the UK.

Good, rapid establishment is the key to success in OSR and if anything, the current conditions make this even more important. One way to take more control of your OSR field performance is to give it the best possible start by making very early nutrition applications. This fuels early growth and can result in significant yield benefits – so why are many growers reluctant to do it?

This is a common assumption. However, our own trials over a number of years have shown that applying nutrient to the crop as early as possible can make a significant difference to its performance, no matter when it is drilled.

As well as the sowing date, some growers may be hesitant to make applications depending on the type of autumn experienced. However, again our trials have shown positive results irrespective of this, with consistent improvements in yield producing significant extra margin for the farmer. Positive responses have been seen each year, with some of the biggest benefits noted in open, kind autumns – counter to most people's perceptions.

There is often some reluctance around spending money on nutrition before knowing whether or not there is going to be crop worth applying it to. However, this hesitance somewhat resembles that very well known analogy involving the chicken and egg.

If you do nothing, your crop doesn't have the support it needs to get off to a good start. If you wait to see whether you have a crop before doing anything, you will not get the full benefit of the nutrients as growth slows with falling soil temperatures and shorter day length.

For those considering the merits of early nutrition, a further concern may present itself...

"If I do apply nutrition early and the crop fails, I've wasted that investment"

It's completely understandable to worry about early applications not being cost effective; however, the reality of this happening is very minimal.

If, for any reason, the crop unfortunately fails, it would be easy to conclude that all efforts to help it were futile – a waste of time, resource and expense. However, the fertiliser applied wouldn't be wasted. A re-drilled autumn crop would likely benefit from the available nitrogen and phosphate, with the latter always adding to the fertility of the soil.

"I haven't got a drill that can place the fertiliser near the seed, so I won't get any benefit"

While it's true that placing fertiliser (particularly phosphate) near the seed is probably the best way to encourage early root growth and establishment, we've still seen great responses when it has been broadcast onto the soil. The key is that it must be applied immediately after drilling or, even better, just before if using a low disturbance system.

"What product should I apply?

Before discussing that, a comment I'd like to make is if you've made the decision to grow OSR and have already ordered your rapeseed, I think you should be ordering your fertiliser now too. The relatively small quantities involved can take longer to get onto farm, so ordering early means that you will have them ready to apply at the earliest opportunity.

In terms of product, straight nitrogen is often used as it may already be in on farm. Although it can provide a clear benefit and help fuel overall growth, I think you're missing a trick if relying on nitrogen alone.

Generally, we have seen a better and more consistent performance where phosphate is included too. As mentioned, while the nitrogen stimulates top growth, the phosphate encourages the all-important root growth for establishment and success of the crop. The trial below from 2014 clearly highlights the benefit phosphate can provide: 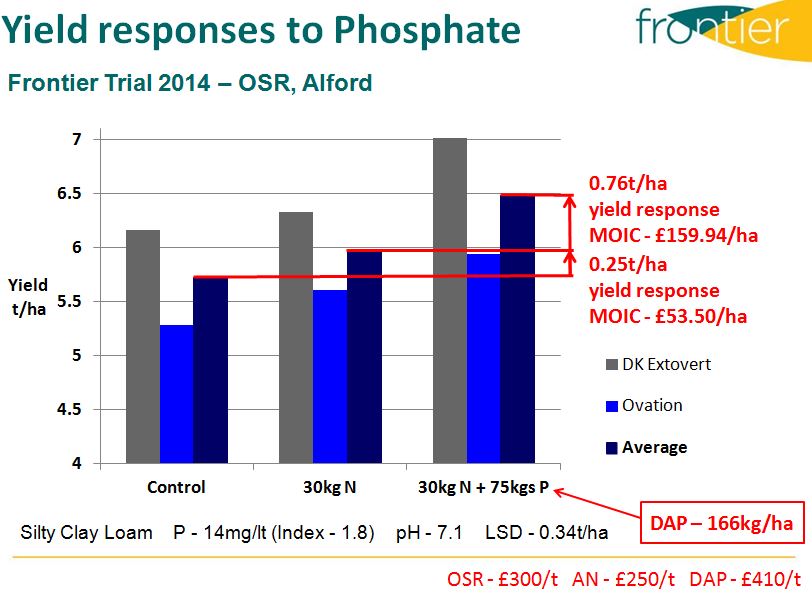 Good products to consider include DAP, NPK products, NP liquids and micro-granules (although you will definitely need a suitable applicator on the drill for those final two).

Alternatively, modest rates of organic manures can be good alternatives to consider if you have these available. These can be very effective for establishing rape and generally have a nice amount of nitrogen, phosphate and other nutrients available.

"At what rate should the products be applied?"

With the exception of NP liquids and micro-granular products that are applied at lower rates, the application rate should be set to apply 30kgs/ha of nitrogen, the maximum permitted under NVZ rules. For example, that would be 166kg/ha for DAP.Where people have the ability to place granular fertiliser with drills, there is often the temptation to reduce this rate because of the benefit of placement next to the seed.Admittedly it is only one trial but the results below question that practice, as the benefit of placement was really seen when the full rate was applied. 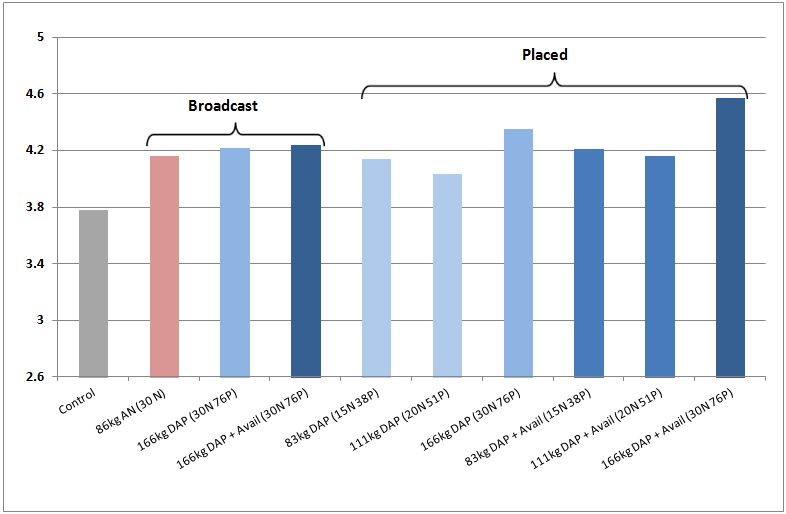 The establishment phase of OSR really is crucial and I know it can be a huge challenge, but to me it makes complete sense to give it the best start possible by promoting rapid early growth that has consistently led to increased yields.

That benefit will only come from very early applications at drilling. Do not delay in getting the fertiliser ordered – you need it ready for the optimum drilling conditions when this unprecedented period of hot, dry weather finally ends.

When it rains it pours: Managing your wild bird seed and game crops