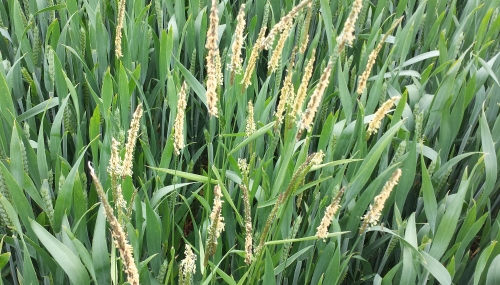 Innovative kit that controls the return of grass weed seed at harvest is on its way to the UK from Australia in time for a farm trial this summer.

The trial of the ‘Chaff Deck’ fitted to a combine will take place on farm manager, Jeremy Durrant’s Essex farm and is being organised in partnership with Frontier Agriculture, AHDB and Primary Sales Australia, the manufacturer of the Chaff Deck.

The Chaff Deck is among other novel technologies used Down Under to help control grass weeds, many of which carry herbicide resistance – just like black-grass.

Used in a controlled traffic farming situation, the Chaff Deck captures the chaff from the back of a combine and arranges it in the dedicated traffic-lane behind the rear wheel tracks. The resulting wheel tracks are highly competitive for the weed seed and are therefore less likely to grow.

The Chaff Deck is already commercially available in Australia and the UK project team is keen to see the system operate and if a combined approach incorporating the Chaff Deck will work in European conditions.

Trial protocols are being devised by Frontier’s 3D Thinking trials team in partnership with Mr Durrant and AHDB. The trial will set out to assess the success of the kit and especially to explore potential challenges such as how effective the Chaff Deck will be in UK crops and how much control of black-grass seed can be achieved.

James Moldon, head of technical services at Frontier and leading the project trial said: “Our 3D Thinking trials programme seeks to find solutions to the challenges facing farmers and agronomists. Black-grass continues to be a major headache for many and its control is currently managed through an integrated approach using plant protection products alongside cultural controls such as spring crops and cultivation techniques. However, this use of machinery to increase that control is novel. Although we don’t know if it will work in a UK field situation, our protocols will test that and we’re keen to explore.”

Harry Henderson, AHDB’s knowledge exchange manager said: "I was initially sceptical because chaff loadings from Australian and UK combines are very different so at first the engineering may struggle. However, if the whole concept shows promise, then engineering could overcome the issues.  With black-grass control needing many angles of approach it will be interesting to see if this could add another tool to the growers’ armoury. I am always keen to raise the debate and get the industry to explore alternative ways leading to innovation.”

Jeremy Durrant of EW Davies Farms said: “We know that there is still some black-grass seed around at harvest as you are always able to see where the combine has been blown down. The big question is actually, how much? We also know it is a numbers game, so ever since I heard of the concept I have always been intrigued to find out if we could make use of our controlled traffic lanes to help provide some control.  Along with many other people, I too have been sceptical about both how much seed is actually left as well as if the machine could cope with our volume of residues. However, with the ever increasing challenge we face of keeping on top of the problem I took the view that until we actually saw how it performed in our conditions we would never actually know.”

The Chaff Deck for the trial is currently on board a container ship and is expected to arrive this summer when it will be fitted to Mr Durrant’s combine in time for harvest.