A joint trial investigating the use of ‘chaff deck’ kit to control the return of grass weed seed at harvest is underway in Essex.

As part of its 3D Thinking trials programme, Frontier announced earlier this year that it is evaluating the chaff deck in collaboration with E W Davies Farms of Essex, Primary Sales Australia, Rothamsted and AHDB.

The chaff deck arrived this month and was fitted to the farm’s 780 Class Lexion combine which has a 12.2m MacDon D65 header and is operated under CTF.

This trial is looking at the system’s potential as part of an integrated blackgrass management strategy.

Harvest using the kit has begun in a crop of Volume winter barley with a background blackgrass population of 200–250 heads/m2. The standard farm treatment of all straw chopped will be compared to the chaff lining trial as well as a straw removal approach.

Once barley harvest is complete, the chaff deck will move on to wheat harvest in late July/early August.

Paul Fogg, who is leading the trial for Frontier said: “We’re pleased with the chaff deck’s initial performance – operationally it’s going as planned. One of the initial questions was whether the chaff deck could cope with the increase in crop biomass of the UK crop. The crop was first cut on 11th July; spot yields were in excess of 11t/ha and early indicators are that the system worked well.

“It will be interesting to see how it goes as we move into wheat and of course the real test will be the effects on blackgrass populations as we establish the next crop.”

Retention of weed seeds at harvest varies depending on species and time between seed maturity and harvest.  Annual ryegrass, bromes and wild oats have high seed retention at crop maturity. Meanwhile, blackgrass can be more variable, with seeds generally shed over time as they mature. To reduce the volume of seed being added to the existing seed bank, various harvest weed seed control approaches can be taken. These include direct baling of harvest residues behind the combine, collection and removal of the chaff fraction, harvest seed destruction and chaff lining.

What is chaff lining?

Chaff lining utilises a chaff deck to collect the chaff fraction of the post-harvest crop residue, which is then deposited on the ground behind the rear wheels via two hydraulically driven conveyor belts. The theory is that this consolidates the weed seed, instead of spreading it over a 6–8m bout width, and places the weed seeds into a hostile environment, where conditions are more challenging when it comes to germination and subsequent emergence.  Ideally, the chaff is dropped onto “permanent” tramlines which are more consolidated, which again should impact the weed seeds ability to establish. This system is particularly well suited to auto-steer harvesting where A and B lines remain fairly constant from year to year (not necessarily a CTF system). 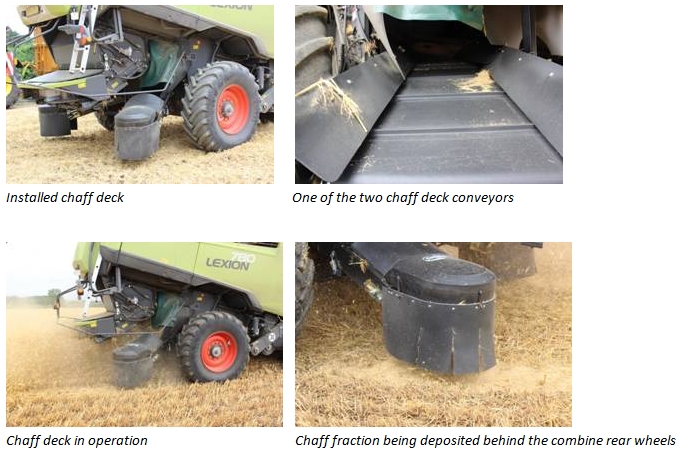