Growers can expect optimum results from adopting variable rate nitrogen this season with crop variation at a three-year high. Recent data analysis of weekly satellite imagery by precision farming specialists, SOYL shows up to 22% more in field variation in this season’s winter sown crops than was present last year.

For early applications this variation can have a significant effect, “Second applications on wheat are typically 70-100kg/ha nitrogen and we are seeing an actual infield range in crop demand of over 60 kg/ha. The range refers to the difference between the lowest nitrogen rate requirement and the highest nitrogen requirement within a single field. This means a flat rate application of 80 kg/ha could correspond to a field’s actual requirement that ranges from around 50 kg/ha of nitrogen up to as much as 110 kg/ha nitrogen. It’s easy to see where the cost and implications of over and under applying could add up.

“Yield potential of crops currently looks very good. Even canopy management is very important but keeping the crop green for as long as possible will also have a significant impact on final yield and quality; especially in oilseed rape. Later nitrogen application should take more account of fertility and yield potential which we do with a ‘reverse canopy’ model for final applications. It’s important to adjust applications to even canopy and target yield potential, if not the crop can run out of nitrogen and senesce before it reaches that potential.

”Above average temperatures, a generally warm winter and consequently higher soil temperatures have meant that soil nitrogen has continued to mineralise this season. Even with the heavy rain experienced in some areas in March, this nitrogen is likely to be available to the crop for much longer than is normal. This may result in higher Leaf Area Index (LAI) values particularly in canopy within areas of the field which are naturally more fertile and hold more nitrogen such as valley soils and silt clays. LAIs in wheat varying between 0.5 and 1.7 are quite typical this spring meaning significant variation in crop nitrogen applications will also be required.

Ten years of in field trials by SOYL have shown an average yield response of 4.6% when comparing SOYL variable rate nitrogen with a flat rate policy. “This is the average and typically we see even better yield responses when crop variation is high, like this season. At current crop prices the potential benefits are almost irresistible.

”Variable rate nitrogen costs between £2-9/ha depending on the area covered. The potential benefit equates to about £70/ha based on an average 4.6% yield increase with wheat valued at £150/tonne. 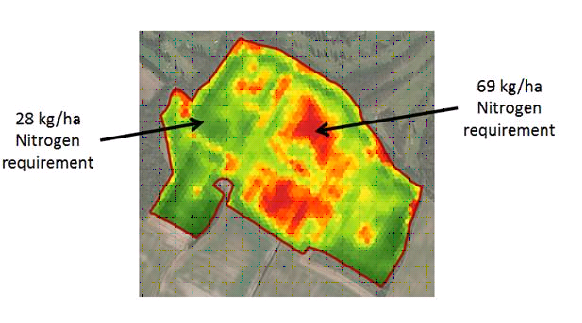 Nitrogen requirements within each field vary significantly this season.