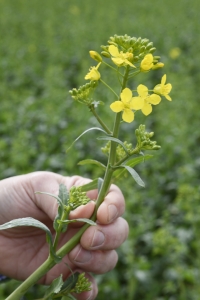 Frontier's technical team says that growers faced with rape crops at varying stages of maturity will need to give careful consideration to desiccation this season. The use of a pod sealant product is always advisable to increase the efficiency of the desiccation process and prevent pod shatter but Frontier says it will provide additional benefits to growers with inconsistent crop growth.

Brian Ross, technical manager for Frontier explains: "Desiccation where extremes of crop stages are prevalent even within single fields will be difficult to manage.

"Oilseed rape crops have had a torrid time, challenged by weather, slugs and incessant pigeon predation. This has resulted in variable crops with a number of growth stages apparent; from full flower and good plant stands, through to very thin, relatively short crops with some flowering but many still at bud stage. The use of a pod sealant is advised for all rape crops but will be an especially useful tool to help maintain pod integrity of those crops at inconsistent growth stages."

There are three main methods of desiccating a crop: chemical desiccation, direct combining or swathing.

The most common method of desiccating rape this year is likely to be chemical desiccation using one of three active substances: glyphosate, glufosinate ammonium or Diquat.

If the crop is even with no very difficult weeds such as sowthistles or cleavers, an application of straight glyphosate is a relatively inexpensive option. Glyphosate is not a true desiccant but rather removes moisture from the plant so patience is needed after application. Harvest will not be possible for up to 21 days following glyphosate. Where there are difficult weeds, an addition of Blaze (ammonium sulphate + polyacrylamide) can help speed up action against them.

For growers with seed crops glyphosate is not permitted. If a 'kinder' alternative to Diquat is required growers should choose glufosinate ammonium (Harvest) instead. This too requires patience as it takes up to 21 days to work properly depending on the weather.

Where crops are at a wide range of stages and it is difficult to separate into areas ready for treatment the use of a pod sealant such as Podium or Podstik across the field will help manage this.

Brian explains: "Sealant should be applied when the most forward part of the crop is almost ready for desiccation. Under normal weather conditions this will hold pod integrity of those forward parts until the rest of the field is ready for treatment. This has worked very well in the last few years and could be a very useful tool this year. It can also be added to the glyphosate where crops are even. Podium and Podstik have the added advantage of drying within 30 - 45 minutes. Follow label recommendations on cleaning out after using the pod sealants."

The third active is Diquat which is a true desiccant and works far quicker than the other two. This is very useful where poor crops contain a lot of 'rubbish' and need to be dealt with swiftly. Again, the addition of a pod sealant, either with the application or on its own, will help where large areas are to be sprayed. This will reduce the risk of pod shatter where harvesting is delayed due to workload or weather issues.

Direct combining is, agronomically, a better way of preserving the crop's potential but requires an even crop and nerves of steel regarding weather conditions. It also offers the benefit of allowing the crop to senesce naturally without the need for direct management.

Swathing is the second kindest method of desiccation with the crop cut and left to dry on top of the swath. This year, however, many crops are not going to have the length of stubble required for good airflow to dry the laid swath. This is also relatively expensive compared to chemical desiccation.

Whatever the scenario, rape desiccation this year will require careful thought and good advice from a professional agronomist.