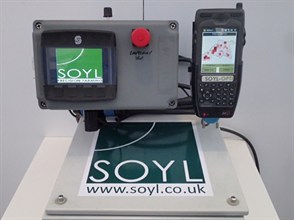 SOYL precision farming has revealed developments which are underway on a brand new system allowing farmers to cultivate land to variable depths, potentially making considerable fuel saving in the process.

Cultivations and the fuel they require are a significant cost to growers. Variable cultivation, so that soil is moved only to the depth necessary, is one way to reduce fuel costs and is the basis of SOYL's research.

Deeper cultivations require more energy to carry them out. An increase of only 50mm depth can increase the draft forces from 3kN to nearly 6kN - leading to significant increase in fuel required to cultivate.

David Whattoff, development manager with SOYL explains the concept: "Many farmers already benefit from mapping soil types within their fields to vary their seed rates effectively.  Recently, using a GPS field penetrometer, SOYL has additionally mapped the depth of compacted soil layers within the field. Combining this data has highlighted that different soil textures have different structures which compact differently within the field. This is important because a measured soil resistance in excess of 2mPa (300psi) creates a barrier for root development, prevents the natural flow of water and has a detrimental effect on yield.

"So in context, a clay soil (which is naturally strong) will tend to compact at a shallower level than a sand soil (which is inherently weaker). Therefore, cultivating them both at the same depth is inefficient and potentially expensive - our new system addresses this."

How does it work?

To harness the potential benefits of variable depth cultivations, SOYL has developed a controller which can be retro fitted to any cultivator utilising a hydraulic packer roller for depth control.

The controller has four main parts:

During cultivation the computer is continually measuring the position of the packer roller, so when the GPS device sends a new depth instruction, the proportional control valve is activated to move the packer roller up or down accordingly.

Using an ATV mounted penetrometer with a 25m grid sampling method, 16 measurements are collected per hectare. The penetrometer records the soil resistance value every 25mm down to 600mm. The data is then processed to select the optimum depth for each part of the field. (This is the most intensive method and more suited to root crop growers.)

Using soil texture maps as a guide, the grower can take his own measurements using a handheld penetrometer or a spade to manually identify the optimum depth for each soil type zone.   These measurements would then be digitised and uploaded to the cultivator. (This method gives combinable crop growers an alternative solution.)

For straw incorporation, it is possible to use yield maps as the base data for variable depth plans. If one tonne per hectare yield requires 15mm of soil to incorporate its residue, 10 tonne per hectare yield would therefore require 150mm cultivation depth. This method could also be beneficial for cultural control, where known areas of blackgrass could be intentionally cultivated less deeply to aid their germination.

The new system is being presented to farmers at SOYL's winter workshops across the UK. SOYL also exhibited the system at this year's LAMMA show where it won a prestigious IVEL award. The Ivel Award, sponsored by the Institution of Agricultural Engineers, is given for the product or innovation which has the most positive impact on the environment.

SOYL's development of the new system continues with cultivations taking place harvest 2013. Farmers interested in discussing variable rate cultivation with SOYL should call 01635 204190 or email This email address is being protected from spambots. You need JavaScript enabled to view it.