Chris Harrold, agronomist with Frontier, gives timely advice on improving weed control following a season that has been wetter than any other in living memory. These unusual conditions have led to disappointing levels of control, meaning growers are likely to be challenged by a large return of weed seed and high levels of dormancy. However, there are still a number of areas where they can take action to improve control in the year ahead.

As combines continue to roll across the country, cultivation has already begun in many fields in preparation for the next crop. And what a contrast to this time last year with many soils still at field capacity and showing the effects of the extreme weather this spring.
This combination of factors needs careful consideration when planning the 'strategy' for establishing the next crop. The weather may have conspired to present a testing set of circumstances but you can counter this by giving thought to those aspects of the plan that you can control. These include choice of cultivation equipment, depth of cultivation, use of stale seed beds and timing of drilling. Knowing the specific weed issues you are dealing with in each field is also important in order to 'tailor' your approach.

Once fields are cleared there is one tool that is invaluable in helping make an informed decision about the cultivation strategy and that is the humble spade! Taking time to dig a few holes to see what 'lies beneath', especially where you know there are possible compaction issues, will be worthwhile. It may even save time and money if the issues are shallower than you thought.
Where soil structures have been affected due to the wet weather, be careful not to work too deeply unless you are confident the operation is having the desired effect. For example, there will be no benefit in sub soiling to remove compaction if the soil moisture is too high as you may lift the soil but not get the necessary fissuring. Working soils to depth may distribute weeds seeds throughout the soil profile making it more difficult to control them in subsequent crops.

A large proportion of oilseed rape is now established using a non inversion approach, principally adopted to reduce establishment costs. Many manufacturers now make combined oilseed rape seeding cultivators, designed to establish the crop in wide rows in one pass. This can help achieve well structured canopies but this approach also gives weeds more of a chance to become established early on when the crop is less competitive in the open ground between the rows. These techniques may also leave seed close to the surface or even uncovered, something that must be avoided when sowing insecticide treated seed. This year another challenge with this method of establishment will be in those fields that require some 'remedial' work to rectify ruts created during harvest. In these cases, turning to deeper cultivations such as the plough may not be an option, especially if soils are still close to field capacity. These cases will need treating carefully and hopefully the weather will improve to allow sufficient restoration of these areas before sowing.

In cereal crops the use of stale seed beds is becoming increasingly important in the battle against grass weeds. Last season, when conditions were dry, the effectiveness of this approach was limited, which could be one of the reasons for the poor level of grass weed control. This year, soil moisture is not likely to be a limiting factor.  This, along with the proven benefits that delayed drilling delivered last year in terms of helping to reduce grass weed populations, means every effort should be taken to utilise stale seed beds this season. As mentioned already, the dormancy of grass weeds seed is likely to be high.  Where this is an issue, then stale seed beds and delayed drilling are an essential element of the cultivation and establishment strategy.

Where possible the approach should be to disturb as little soil as possible to create the stale seed bed. Ideally the top 20 to 40mm should be sufficient soil to work to encourage good seed soil contact and germination as well as giving some crop residue incorporation. Keeping the surface firmed to maintain soil moisture will also aid weed germination. The aim should be to spray off repeated flushes of weeds as they germinate which could be a protracted process if dormancy  proves to be high. 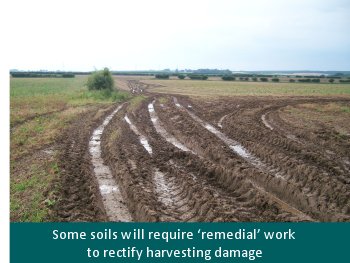 Where drilling was delayed last season, the extra opportunity this gave for another treatment with glyphosate contributed to the reduction in grass weed populations in the crop. Whilst sometimes it may appear that there is not much 'green' material to spray off, in the case of blackgrass the first leaf is almost 'needle' like in appearance and on closer inspection of the soil surface you may be surprised how much is actually there. Work has also been done to look at the effect that germinated weeds have on other weed seeds in the soil. The 'allelopathic' effect that some plants have can inhibit the germination of other seeds in their vicinity.

Therefore by leaving the stale seed bed to 'green up' over a longer period and only treating once you may limit the total amount of weed seed that germinates. This is a good reason to take out several flushes of weeds where opportunity allows, rather than wait and take out one flush just prior to drilling.

The quick turnaround between the last crop and oilseed rape establishment usually means there is little opportunity to take advantage of a stale seed bed for oilseed rape. Therefore, where there has been a grass weed issue in the previous crop it is likely to prove beneficial to avoid deeper cultivation and leave the seed return on or near the surface. This is important for the effectiveness of propyzamide and carbetamide as they will not work as well on grass weeds germinating from depth.

It is important to know which weeds you are dealing with and ideally these should have been mapped prior to harvest as part of the planning for next season. Blackgrass has already been mentioned and is the primary weed of concern in many cases. However brome grasses are also increasing in presence and the approach to dealing with them is slightly different depending on which types you have. Brome species that grow in arable rotations belong to the Anisantha group (sterile and great brome) or the Serrafalcus group (meadow, soft and rye brome). All species emerge throughout the autumn though soft brome will also emerge in the spring. Sterile and great brome both germinate in the dark so cultivating soon after harvest will encourage their germination. However, meadow, soft and rye brome need light and warmth for the seeds to ripen and mature on the soil surface before germination. Therefore cultivation should be delayed post harvest for as much as a month to reduce dormancy.  After this time cultivation to 20 to 40mm to create a stale seed bed can take place and fields then treated as for the other grass weeds. Whilst germination of ryegrass seed occurs over an extended period, some reduction in the population can still be achieved by the use of stale seed beds.

Where it is not possible to create a suitable stale seed bed due to a significant weed seed return from the previous crop, then the use of rotational ploughing may also be effective. This will require attention to detail when setting up the plough. The objective should be to do the job well and completely invert the soil in order to bury the weed seed to depth and not simply 'black' over large areas in the day.

Keep a step ahead of the weather

Whilst the weather this autumn will always be a significant factor influencing the methods used to establish the next crop it is still important that there is a plan in place now to rectify the legacies of the last season. Knowing what weed and soil issues you have is a vital part of the planning process.