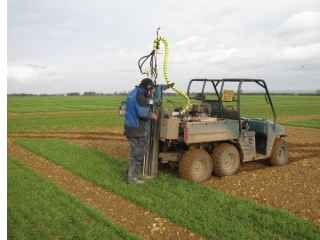 Results from soil N tests at our trials sites suggest that the situation is variable this seaon and that careful consideration should be given to nitrogen rates and timing this spring.

Most of the nitrogen was recorded in the top 30 cm soil profile in the third cereal field at Haywold and both fields at Cammeringham. In contrast, at Haywold soil-N level increased down the soil profile to 90 cm depth where the preceding crop was potatoes.

An important factor in these findings was probably the weather conditions since last September. The period from September 2011 to January 2012 has been drier and milder than in the equivalent period last season. This has meant that more mineralisation of nitrogen has probably occurred (due to mild temperatures) and less loss by leaching (due to drier weather).

Soil samples taken from other locations in January 2012 by Frontier, indicated that soil-N levels are indeed variable.

The results were from soil samples taken in late January and the recent switch to colder temperatures will have resulted in slower plant growth and possible leaf loss. When rainfall returns, it is likely to result in more nitrogen leaching.

In order to help decide nitrogen rates and timing in winter rape, consider Green Area Index (GAI) as a guide where, as a rule, GAI value = 1 indicates that the canopy contains 50 kg/ha of N.

There is variability between crops but in general, many winter oilseed rape crops appear 'thicker' than late winter 2011. As a measure of crop ground cover, GAI was assessed in late January 2012.

Whilst it is not possible to directly compare the variety trial 2012 values with similar for 2011, readings taken in mid February 2011 from our agronomy trials at Haywold indicated that the mean GAI values in 2012 were considerably higher than last season.

The lowest GAI vales at Haywold and Horningsea were recorded in plots of semi dwarf varieties.

Careful planning of fertiliser top dressings will be needed this spring. Where crops are lush, it may be possible to delay the first fertiliser top dressing until end of February/early March but the rate applied at the first dressing in March should be increased to compensate. In more backward crops or where pigeons have been grazing, it may still be prudent to apply the first nitrogen dressing in February when active crop growth has started.

At all trials sites, we intend to apply a low rate of ammonium nitrate to the appropriate trials when conditions allow in mid/late February. Depending on crop growth and weather, a fertiliser with additional sulphur will be applied in mid March and early April.

Results from our trials in the last three seasons showed the importance of sulphur in maximising yields and improving oil content of winter oilseed rape. At all three trials centres, we intend to apply approximately 90 units/acre, 113 kg/ha of SO3 this spring.

In planning nitrogen rates for winter rape crops, remember to hold back some of the spring N if you intend to use Oilseed Extra after petal fall or apply as an additional 'top up' where crop yield potential will allow under NVZ restrictions. Our trial results between 2008 and 2011 showed consistently positive yield responses to such applications. 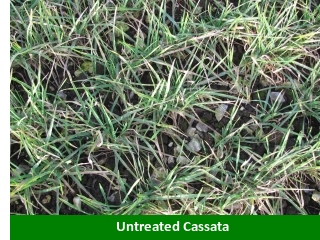 Growth stage and tiller numbers in the winter wheat and winter barley plots have remained similar to those reported in the last update at all three trials sites despite above average air temperatures during January 2012. The winter barley plants appear lush with the 6-row varieties Escadre, KWS Meridian and Element in particular, as well as both 2-row varieties Pearl and Sinatra more 'upright' than other varieties in trial.

Active mildew along with net blotch can still be found in the base of many varieties at both Haywold and Horningsea. The autumn application of fungicide in November appears to have reduced overall mildew levels in the base of varieties especially Cassata. Rhynchosporium is present in KWS Cassia and Saffron at Haywold whilst very low levels of brown rust are present in KWS Cassia and California at Horningsea. 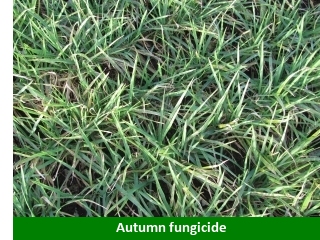 Duxford, Denman, Havana and the coded variety RW 40967 appear more 'upright' than other varieties in trial. Septoria tritici is the main foliar disease at all three trials centres although active yellow rust is also present in Oakley and mildew is common in many varieties.

There are low levels of brown rust in Beluga, Oakley and Havana at Horningsea.

As always please consult with your professional agronomist before making cropping decisions. Contact Frontier today to speak to your local advisor.