In early to mid January 2012, winter barley tiller numbers at Haywold and Horningsea are largely similar to those seen in January 2010 and 2011.

In contrast, tiller numbers in wheat plots at Haywold and Cammeringham are higher this year compared to the previous two seasons.However, the dry start and continuing dry conditions at Horningsea have meant canopies there are smaller. 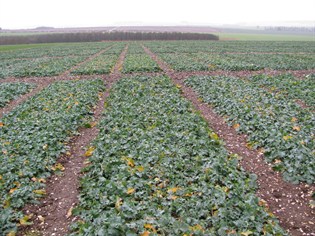 The oldest leaves of plants have died back at all sites but canopies still appear 'thick'. There is still potential for significantly cold weather so we intend to review plans for top dressings at the end of January/early February.

To date, there are no signs of pigeons landing in the trials at Haywold and Cammeringham.
Plots continue to be monitored and deterrents will be erected as necessary if activity
starts within the plots. 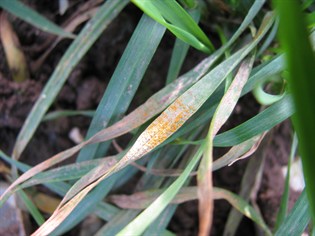 In winter wheat trials, Septoria tritici and mildew are the main foliar diseases at all three
trials centres. Yellow rust has recently appeared in Oakley at Haywold. Brown rust is present
in Oakley at Cammeringham and Horningsea.

In winter barley trials, net blotch and discoloured mildew is present at both Haywold
and Horningsea.

With the current high disease inoculum levels, depending on weather conditions over the next few weeks, the potential for high background disease pressure this spring seems likely.

It has been reported that egg hatch was underway in early January around Cambridge but in
contrast, egg hatch has not yet occurred in the north.

Growers are advised to monitor local temperatures and the web page www.dowagro.com/uk/cereal/pest for further information.

Wheat bulb fly can also have a devastating effect on spring barley crops when larval hatch coincides with seedling emergence and growth. The use of seed treatments containing fludioxynil and tefluthrin can be effective in limiting damage from wheat bulb fly.

No symptoms of gout fly larval have been recorded at any of our sites although there are reports of damaged tillers in some farm crops. In some previous seasons, damage symptoms have typically been observed in early February. The maggots feed on the young plant during the winter and the attacked tillers become swollen and 'gouty'.

While each maggot attacks only one tiller, that tiller will not produce an ear. Where plants are small and backward with few tillers, an early application of nitrogen may be considered to help ensure healthy tillers survive. Chemical control is generally not worthwhile in spring, especially in well-tillered crops.

Frontier is conducting spring barley variety and agronomy trials at Haywold and Horningsea
this spring. In addition, spring bean variety and phosphite trials are being conducted at
Horningsea.

At Horningsea, glyphosate was applied last autumn to 'clean up' any weeds and volunteer cereals ahead of this. A similar application is planned for Haywold.

Whilst every effort has been made to ensure that the information presented in this update is correct, Frontier Agriculture does not accept liability for any error or omission in the content. You are advised to take professional advice when making technical cropping decisions. Contact Frontier today to arrange a visit from one of our local agronomists.