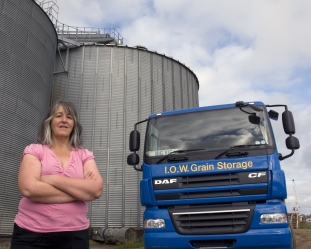 Isle of Wight Grain Storage and Co-operative has just completed its first year of grain marketing with Frontier Agriculture with some impressive results.

Zoe Chapman, Chair of Isle of Wight Grain Storage and Co-operative says making the switch to Frontier, the UK's leading grain marketing business, in 2010 was a very good decision which is paying off for the co-operative's farmers.

Zoe explained:  "Having always previously marketed our grain through traditional farmer controlled businesses we made the move to Frontier's professionally managed grain pool last year. The knowledge of their trading team, international access and excellent infrastructure has opened up new markets for Isle of Wight farmers' grain. And we've been delighted by the results of those pools, our members have reaped the rewards this year.

"This partnership is a natural progression for a forward-thinking co-operative. By working with a commercial business like Frontier we have retained the independence we value so much and at the same time improved profitability for our growers. Ultimately price is important to them and that's where Frontier's pool payments have delivered. In previous years our growers have only received a feed wheat price for low grade milling wheat and now we have achieved £5-£7/t more for these lower grades."

Isle of Wight Grain Storage and Co-operative members received feed wheat and feed barley base prices in excess of £160/t with additional premiums of up to £23/t for milling and £20/t for malting.

Trading with Frontier has also given the Isle of Wight Grain Storage Co-operative access to Frontier's Southampton Grain Terminal (SGT), and consequently the wide range of international markets Frontier trades with via the facility.

Andrew Flux, Grain Procurement Manager for Frontier, said: "We were delighted to be given the opportunity to market grain for the Isle of Wight Grain Storage and Co-operative. We knew that the model would work for both of us and more importantly for their farmer members and the results we have recently shared demonstrate that. We're very pleased for them."

Frontier expects that news like these may pave the way for other co-operatives and smaller, independent storage companies to team up with them to maximise their grain marketing returns.

Andrew concluded: "Agreements of a collaborative nature like this allow farmer co-operatives to draw on our commercial expertise and market knowledge. We're already talking to a number of similar organisations about marketing for the coming season."