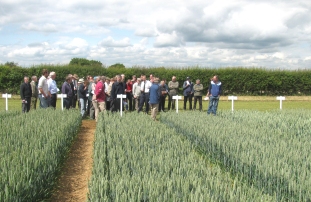 Recent farmer events organised by Frontier Agriculture have attracted more than 2,000 visitors. Throughout June Frontier opened its trials centres and demonstration sites, with a number of Open Days for UK growers, as well as organising a series of Moisture Meter Clinics.Frontier now has three trials centres and ten demonstration sites; with at least one site in each of the key arable areas of the country.Through the Open Days Frontier showcases its trials research programme.  The varieties included and the crop protection strategies adopted at each Open Day site have been chosen carefully to be highly relevant to growers in the surrounding area.A doubling of the number of demonstration sites to ten over the last year means more events have been organised and attended in 2011 than ever before. New Frontier demonstration sites are located in Lincolnshire, Northamptonshire, Northumberland, Perthshire and the Scottish Borders. These complement existing sites in Hampshire, Hereford, Norfolk, Suffolk and Yorkshire.Jim Carswell, National Trials Manager with Frontier, says: "Farmers find our Open Days very useful and having additional demonstration sites means we've been able to provide support and advice to more customers this year. Growers can visit their local site to see the latest technology applied on land similar to their own, under the same weather conditions they experience."All of the advice given is founded on Frontier's scientific trials research. The scale and size of this programme is extensive; at the Haywold, Yorkshire Wolds trials site alone in the 2010/2011 season, several hundred varieties from four different combinable crop groups are being evaluated under different management input regimes to provide detailed information regarding variety selection.  Frontier also has trials centres at Cammeringham in Lincolnshire and Horningsea in Cambridgeshire.Farmer David Lumley of Highfield Grange near Pickering, adds: "I visited the Open Day at the Topcliffe site for the first time this year and I was really impressed. The information provided was just right. There was enough to be relevant and useful but not too much to be confusing. The event was excellent and the advice provided will be very useful to me when planning for next year."As well as the Open Days, Frontier organised a number of Moisture Meter Clinics which enabled farmers to have this vital equipment checked ahead of harvest. A number of local charities are also set to benefit from money raised at these events.Mr Carswell says the popularity of the Open Days could lead to more events being organised throughout the year. "The attendance shows that our customers value being able to meet us at a site in their area, where we can show them actual results in field, on land similar to their own. It's very likely that we will continue increasing the number of events in the future."