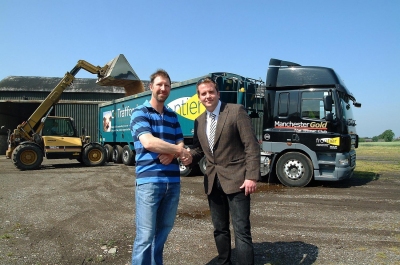 Frontier Agriculture has delivered its two millionth tonne of wheat to Cargill's starches and sweeteners plant in Manchester's Trafford Park.The plant processes around 2,000 tonnes of feed wheat every day, to produce glucose for a wide range of markets including confectionery and energy drinks.Frontier is responsible for supplying the plant's entire wheat intake. This is done through its Manchester Gold wheat club which delivers a range of benefits to farmers in return for supply. Mike Ayers, Manchester Gold Club Manager, says: "In the four years since the club was launched we have developed excellent relationships with farmer members, many of whom now grow wheat specifically for the plant. We've also established a strong and reliable network of hauliers who have played a vital role in delivering wheat to the plant, whatever the weather."The benefits to farmers of supplying wheat to the Manchester plant are wide ranging and include average moisture contracts, text message analysis of load following tipping, and earlier payment terms. Mr Ayers explains: "It's proved rewarding for the growers already involved. It's easy for them to arrange collection and delivery of grain. It's a seamless process that provides the farmer with much better information and benefits than a standard grain marketing contract. For instance, with Manchester Gold, average grain moisture terms mean that niggling claims for occasional loads slightly above agreed moisture level are avoided."With the opening of the new Vivergo bioethanol plant in the east of the UK, there is a shift in grain dynamics. This presents even greater opportunities for farmers in the west and south because more of the wheat for the Trafford plant will now be sourced from these areas. Mr Ayers explains: "'As a result of these changes, we're now able to offer the benefits of Manchester Gold to new members. We're anticipating sourcing more of our grain from new club members in places such as Oxfordshire and Gloucestershire."Simon Edwards of Gore House Farm near Liverpool, was the grower to supply the two millionth tonne and says: "It's great to be the farm that supplies this landmark load to the plant. I've been marketing my wheat through Manchester Gold ever since the club was launched, with around a third of my grain marketed in this way. I initially joined the club, attracted by the prompt payment terms but there are many reasons that I continue to trade through Manchester Gold. I particularly like the new text message load analysis. I receive details of moisture content and bushel weight within minutes of my grain being tipped at the plant, that's very useful to me."Martin Douglas, General Manager of Cargill's starches and sweeteners business in the UK, says: "We're thrilled to report that we have processed our two millionth tone of UK farmers' wheat in what must be record time for any single UK wheat mill. Since we officially opened for business in April 2008 we have had fantastic supply chain co-operation from Frontier. We would like to place on record our appreciation to the many hundreds of farmers who have supplied us with great professionalism over this period. It is also pleasing to observe so many of them continue to visit our site and take a keen interest in what happens to their produce as it is processed into food ingredients. We look forward to working with both Frontier and our farmer suppliers in the future to demonstrate responsible supply chains to our customers and added value to our suppliers."