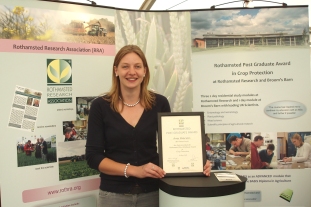 Amy Pearson, of Frontier Agriculture, has been nominated as the best student on the 2011 Rothamsted Post Graduate Award in Crop Protection.

Receiving the Rothamsted Post Graduate Award Certificate, from Peter Taylor, chair of the Rothamsted Research Association (RRA) at Cereals, Miss Pearson said: "I really enjoyed studying to complete the Award. The work was challenging and much more research based than any previous course work I'd done. I found it particularly interesting to look at the scientific work taking place to investigate new chemistry."

"Anything that helps knowledge transfer between scientists and agronomists is a good thing and the course encouraged that. I would definitely recommend the Award to other students."

"Originally a concept of the RRA, the course was set up to deliver a high level of training to industry," explains Bill Clark, director of Brooms Barn research, who has been closely involved in this initial pilot year of the course.

"Funding for the course has been primarily driven by the BBSRC and supported by HGCA, sending a very powerful message to the industry in supporting knowledge transfer and food security issues within UK agriculture."

The course is based on 3 residential modules, and a project based on a topic area from one of the modules: general scientific principles of agricultural research, plant pathology, entomology and nematology and weed science. The final assessment is based on this written project, a presentation of the project to fellow students and examiners and an oral examination, all of which were overseen by BASIS.

On completion of the course, graduates receive a Rothamsted Post Graduate Award Certificate and if successful in their exams, a BASIS Advanced Module Certificate. The best student also receives a jointly funded travel bursary from BASF and RRA.

"The collaboration of Rob Simpson, of BASIS, was instrumental in ensuring the course achieved accreditation and became recognised as an Advanced BASIS module," adds Mr Clark.

The course will continue to run each year, with a limited number of students from industry.