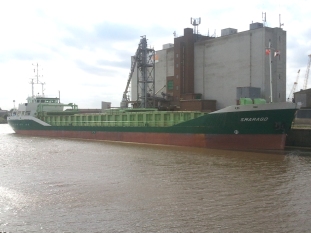 Frontier's Boston export team has revealed that despite still being several months from next harvest, this crop year is already the busiest ever for them. Since last summer they have loaded and exported 141,000 tonnes of Lincolnshire and Cambridgeshire farmers' grain. This is a record for the company at the port, the previous record being during the 2008/2009 crop year when 136,000 tonnes were handled through the terminal.

The attached photograph shows the MV Smaragd loading 3,000mt of feed wheat at Boston silo earlier this week. This is the 54th vessel to be loaded by Frontier at Boston this crop year. The cargo aboard the Smaragd, is bound for the Cargill starch processing plant at Sas Van Ghent in Holland.

Matt Jackson, site manager at Boston says, 'We have been very busy, so far we have tipped more than 5,000 lorry loads, which puts into perspective how much grain we are handling here.'

The strong relationship between Frontier and its farmer customers, and the company's excellent links with overseas grain consumers continues to provide a range of markets for farmers' grain and demand for their crops.

Matt concludes, 'We still have a while left this crop year so we expect to see the number rise even further, we might even top 150,000 tonnes before the new harvest!'