Kings Game Cover and Conservation Crops, a division of Frontier Agriculture has managed to attract a rapidly declining farmland bird, the tree sparrow, to an area of land designated as a demonstration conservation plot at their site in Holbeach, Lincolnshire. 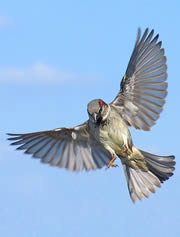 Smaller than a house sparrow and more active, the tree sparrow has a rich, chestnut brown head and white cheeks and is being drawn to an area planted with Kings Campaign Mix. A variety of plants that appeal to wild birds are contained in the mix including red, white and reed millet, triticale and linseed.

Sadly, many of our small farmland birds have suffered severe declines over the last few decades, and none more so than the tree sparrow. This 'country cousin' of the familiar house sparrow was once a common feature of our farms and hedgerows, but has now vanished from many of its former haunts

The plot in Holbeach is approximately 0.5 acres and is regularly attracting over 80 tree sparrows, along with several reed buntings, all feeding on millet planted there.

Simon Tonkin the RSPB's Senior Farmland Conservation Officer commented: "The tree sparrow is a bird that has declined nationally by 97% over the last 40 years, but it is clinging on in Lincolnshire, so it's doubly pleasing to hear that this plot is providing them with much needed seed food."

Richard Barnes, Game Cover and Conservation Crops Manager for Kings added: "What we have achieved here on a relatively small plot of land is a good demonstration of what a small investment in biodiversity can deliver in terms of conservation benefits on farmland.

"By planting awkward field corners in this way, farmers can also meet targets set by The Campaign for the Farmed Environment (CFE). The CFE was put in place to encourage farmers to increase biodiversity and encourage wildlife. These initiatives are currently voluntary, but if the CFE is deemed to be ineffective by 2012, then compulsory measures could be introduced, so it is vital that farmers act now."

The RSPB is urging farmers to leave areas of unharvested crops to provide for birds over the winter period. During the summer months, farmers can create insect rich habitat by planting areas with nectar producing flowers. Creating in-field nesting habitats such as placing skylark plots in winter sown cereals is also beneficial to farmland birds.

By utilising the RSPB's Farmland Bird Package on just over 3% of an arable farm's area, farmers can make a huge difference to the wildlife on their land.

Many farmers throughout Lincolnshire are adopting these measures to help them achieve targets set for the Entry Level and Higher Level government environmental schemes. Simon concluded: "Farmers hold the key to reversing these declines. Farmland birds need lots more farmers to put these measures in place."

For more information about Kings visit kingscrops.co.uk or call: