The image on the right shows the cargo ship MV Sanko Jupiter at Southampton Grain Terminal (SGT), taking load of 27,000mt of UK milling wheat, bound for North Africa. Loading was completed on Friday 24 September and the vessel is now en route to its destination. 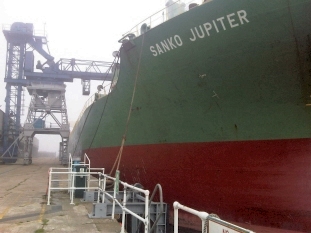 This is the latest in a series of large wheat cargos leaving Southampton by boat and arranged by Frontier Agriculture.

Mike Adams, Export Director for Frontier Agriculture explains: 'We're responding to the world harvest and looking to new markets that have emerged as a result. North Africa imports in the region of 20mmt of milling wheat annually, traditionally supplied from France or the USA. The rising appeal of UK wheat for export, and the weather related issues some countries have faced, mean that we are able to target new grain consumers on behalf of our customers. Along with that, we're investing in better facilities at our terminals to ensure we can capitalise on every future opportunity both in the UK and further afield.'