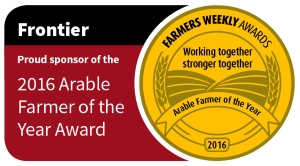 As the search for Farmers Weekly's 'Arable Farmer of the Year' begins, Frontier Agriculture has confirmed its continued sponsorship of this prestigious award category.

Arable Farmer of the Year is one of 17 annual Farmers Weekly Awards which celebrate the very best of British farming by recognising and rewarding innovation, hard work and passion for agriculture. Winners in each category will be announced at a celebration event on 6th October at the Grosvenor House Hotel in London. The theme for this year's awards, 'working together, stronger together', will highlight collaboration between farmers and the industry to spread best practice and inspire others.

Mark Aitchison, managing director of Frontier Agriculture said: "We're proud to confirm our second year of support for the Arable Farmer of the Year award. Last year's shortlisted growers and eventual winner, David Miller of Wheatsheaf Farming Company, were truly inspiring. We're also delighted that the theme of this year's Awards is 'collaboration between farmers and industry' because that's certainly where we believe the future of crop production and the most significant opportunities for success for us all will lie. We look forward to reading and hearing about this year's entrants."

Direct entries are now open and Farmers Weekly is also welcoming third party nominations. Direct entries can be made via this online entry form and nominations via this nomination form. The deadline for all entries is 30th April 2016 at midnight. You can keep up with the latest news about the Awards on Twitter by searching #FWAwards.