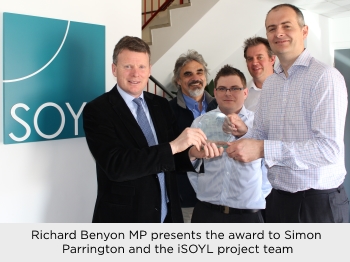 Precision crop production company SOYL, a division of Frontier Agriculture, has been praised for industry-leading technology development by their local MP during the presentation of a recently gained innovation award.

Earlier this year iSOYL, a precision farming app developed by SOYL for the iPad and used by UK farmers, was named as one of this year's 'FinOvation Honourees' by global news site Farm Industry News.

The award, in recognition of development of the app, was presented to the SOYL team at their Newbury base on Friday 6th May by MP for the area, Richard Benyon.

iSOYL, launched in November 2014, is a pioneering system enabling farmers to easily manage and control tasks, such as applying fertiliser, directly from a tractor cab using an app on the iPad. The app enables easy transfer of data to and from the cab and the farm office.

FinOvation honourees were selected based on reader interest in features related to new products launched between November 2014 and October 2015. iSOYL for iPad, developed at SOYL's Newbury site, is one of just 21 agricultural innovations worldwide to receive this recognition this year.

Simon Parrington, SOYL commercial director said: "We were delighted to welcome Mr Benyon to our site again. We have developed a string of 'first to market' innovations since we set the business up in Berkshire back in 1993 and we're delighted to receive this recognition. It was great to show Mr Benyon some of the top-secret precision technology projects we have in the pipeline too."

Mr Benyon added: "It is ten years since I last visited SOYL and it is fantastic to witness the dramatic growth in their business since then. The award is a great achievement for the team at Newbury based SOYL and wonderful to see their technology being used both in the UK and around the world."