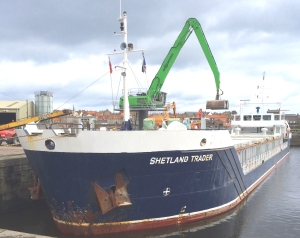 For the first time ever a cargo of wheat left Berwick-upon-Tweed earlier this week. Arranged and loaded by Frontier Agriculture, the Shetland Trader left port laden with two thousand tonnes of feed wheat bound for Belfast on 6th April. The shipment was made possible by Frontier's access to trade in a wide range of overseas markets.

Scotland traditionally has had a wheat deficit but the country's huge 2015 crop, which totalled over 1 million tonnes, combined with a dip in demand has created an unprecedented surplus of supply. Left unchecked this surplus would depress local prices and delay any recovery.

Frontier has helped to find markets for the surplus wheat through shipments to other markets from a range of east coast ports, including this one to Belfast for use in animal feed. This helps secure a better price for farmers supplying wheat to load the boats, as well as reducing stocks and relieving pressure on the market to help support prices going forward.

Frontier trader Nick Baxter explains, "Some of the surplus will still be carried into next season, but in the long term, the market will benefit from any overseas shipments that prevent the excess supply from over-hanging the market in future."

The Shetland Trader is one of a series of boats loaded by Frontier to leave the Borders and Scotland this season. "Frontier always works with growers to find the best markets for their grain. With another bumper crop and further price volatility forecast for the coming season, that will continue to include looking for international as well as domestic markets," concludes Nick.