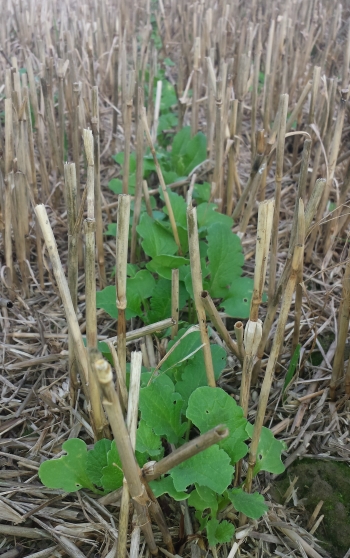 Kings and Frontier are working together to ease the workload for farmers in East Anglia this harvest by broadcasting green cover seed with a modified Horstine machine.

The innovative offer reduces pressure on those already using green cover crops, as well as enabling others to start growing the crops where they may have been unable to in the past.

Seed business development manager for Frontier and Kings' eastern technical advisor, Paul Brown, explains, "To really get the most out of green cover crops, they need to be sown early. However, many growers are too busy around harvest, or their equipment is already being used for drilling rape, so they may have sown cover crops later or not included them in their rotation at all.

"This new service takes care of the job for them, broadcasting small seeds accurately and evenly for quick establishment and freeing the farmer up to focus on other tasks."

Broadcasting into standing crops before harvest can give radish, for example, a fortnight's head start, explains Mr Brown. This means the crop has more time to fulfil its potential in capturing nitrogen and improving soil structure, bringing maximum benefit to the following crop.

The service is delivered by Frontier's contracting team using a 24m Horstine twin air applicator, ordinarily used for applying Avadex herbicide, which has been specially adapted in-house. Successful trials in 2015 showed that it can also apply small seeds, such as mustard, stubble turnips, radish, phacelia and berseem clover, alone or in mixtures.

Seed can be broadcast at a time to suit farm needs, either into a standing cereal crop up to 14 days before harvest or, thanks to low pressure tyres that allow the machine to travel on bare land where needed, onto bare stubble or cultivated ground after harvest. Post harvest broadcasting will require the grower to follow with a simple light roll or harrow and pre harvest broadcasting requires no further action.

Though two companies are involved, the service is uncomplicated. Kings supplies the seed and manages the process and the seed is delivered and broadcast by Frontier's contracting team. Growers receive a single invoice and pay just one price for the seed supplied and applied.