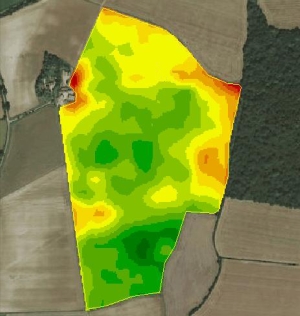 Precision leaders, SOYL say an increase in the number of satellites available to generate field images is aiding the accuracy of nitrogen application maps and consequently driving yields upwards for growers. Specifically, the increase in satellites has led to a significant improvement in the detail and regularity of images available.

In ten years of research measuring yield response to variable rate nitrogen SOYL has found a consistently positive benefit. Trials have shown an average improvement of 4.65% which, with wheat at c£120/t, would equate to a benefit of £56/ha.

SOYL also predicts that their ability to unlock yield potential using mapping data will be further boosted by even more satellites due for launch in the next two years.

"There is a direct link between the number and quality of images available and the potential to improve yield. When we started developing our mapping techniques in 2001 we were working from just two or three images of a field during the nitrogen season and that remained the case until more recently. However, a wave of additional satellites in the last few years has increased the reliability and frequency of images. Most of our growers now receive at least 12 images, so we can target their spring nitrogen even more," explains SOYL's commercial director, Simon Parrington.

SOYL's variable rate nitrogen system is based on interpreting satellite images and presenting data in a way that is easy to understand. Nitrogen maps are made by SOYL, or by the grower, using SOYL's self service website.

"Our images are presented as Leaf Area Index (LAI) maps. We then have tools that use LAI-based agronomy models to calculate nitrogen rates, alongside acquisition of satellite imagery field measurements taken through the season. This process 'ground truths' the imagery and ensures that it is relevant to specifics of the location and the growing season. The more images we have available, the more accurate the resulting maps and yield response should be," adds Mr Parrington.

Welford Farms near Newbury has used SOYL variable rate nitrogen for ten years and manager Rob Waterston comments: "We have hosted a number of trials where we have compared variable rate against flat rate nitrogen and all have shown yield increases of at least 3% in favour of variable rate. In the early days we would work from just three or four images per season and even then we saw a benefit. Now we get over 13 fresh images through the spring which is incredibly useful when making management decisions around the farm."

"Variable rate nitrogen has a maximum cost of £8/ha for unlimited applications through the spring application season, this reduces if you commit more hectares to the service. With an average benefit of £56/ha against a maximum cost of £8/ha this represents a return on investment of 87%. Spreaders and sprayers can be equipped for variable rate nitrogen for as little as £700, explains Mr Parrington.

"We use satellite imagery to improve the precision of nitrogen and plant growth regulator applications at the moment but our vision doesn't end there. We have a number of research projects looking at other uses for imagery to benefit growers," says Mr Parrington.

"We've always led the way in developing precision techniques to aid crop production. The number of satellites available to us brings a host of exciting, and potentially profitable, opportunities for growers," concludes Mr Parrington.