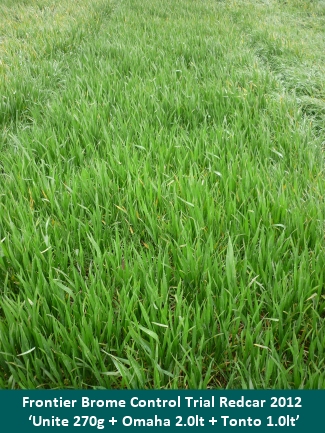 Blackgrass, quite rightly, regularly makes headlines and is a challenge to many growers. However, Chris Harrold, Frontier agronomist says that for many brome is an equal, if not greater, threat to our yields and profitability. Findings from research at Frontier's Trials sites are being used to put together a strategy to improve control of this problem grass weed.
There are numerous pieces of research and trials work focused on control of blackgrass in cereal crops leading to widespread availability of documented advice and best practice guidelines for farmers. However, in some parts of the UK Frontier has found that blackgrass is not the main grass weed challenge to growers, at least not yet. Further north and west in England, and in Scotland the main difficulty for farmers is successfully controlling brome species in cereals, particularly sterile brome.

Frontier believes that Brome is becoming more widespread for a number of reasons. These include the use of non-inversion cultivations, early sowing and adopting a continued use of winter cereals in the rotation. Brome species are very competitive weeds and high levels of control are required to prevent yield loss and seed return to the soil. A recent HGCA publication stated that just five sterile brome plants/m2 can cause a 4% yield loss in winter wheat and this doesn't vary much between the different species of brome either. Brome has a very similar impact on yields to that of ryegrass and wild oats. Based on wheat valued at £150/t and a yield potential of 10t/ha, that 4% yield loss equates to £60/ha. Of course should there be a mixed population of grass weeds the impact on yield would be cumulative and the yield loss potentially much greater.

An integrated approach
An integrated approach to brome control is likely to be the most successful and is the strategy advised by Frontier's technical advisors. This involves employing a range of different cultural methods such as ploughing, later sowing, break crops, spring cropping and employing stale seedbeds. The success of these factors varies according to species and dependent on the likely seed dormancy of the brome species you have.

As with all grass weeds, knowing what you are dealing with is critical to the success of any control programme. Ideally fields should be mapped prior to harvest as part of the planning for next season. There are several brome species that grow in arable rotations and the approach to dealing with each is slightly different.  Brome species that grow in arable rotations belong to either the Anisantha group (sterile and great brome) or the Serrafalcus group (meadow, soft and rye brome).  All species emerge throughout the autumn, though soft brome will also emerge in the spring. Sterile and great brome both germinate in the dark so cultivating soon after harvest will encourage their germination. However, meadow, soft and rye brome need light and warmth for the seeds to ripen and mature on the soil surface before germination. Therefore, cultivation should be delayed post harvest for as much as a month to reduce dormancy.

Where possible, the approach should be to disturb as little soil as possible to create the stale seed bed. Ideally the top 20 to 40mm should be sufficient soil to work to encourage good seed soil contact and germination as well as giving some crop residue incorporation. Keeping the surface firmed to maintain soil moisture will also aid weed germination. The aim should be to spray off repeated flushes of weeds as they germinate, which could be a protracted process if dormancy is high.

Where it is not possible to create a suitable stale seed bed due to a significant weed seed return from the previous crop, then the use of rotational ploughing may also be effective. This will require attention to detail when setting up the plough. The objective should be to do the job well and completely invert the soil in order to bury the weed seed to depth and not simply 'black' over large areas.

Choosing a strategy
There are a limited number of herbicides available to control bromes in cereals. Appropriate herbicide programmes are typically based on the use of an effective pre-emergence herbicide. Products like Vigon (flufenacet + diflufenican + flurtamone) can help reduce early weed competition. These will need following in the late autumn, or more typically in the spring, with an appropriately timed post-emergence herbicide to maximise control of survivors and later germinating bromes.

Autumn brome herbicides include the broad spectrum products Unite and Broadway Star and in the spring Pacifica can also be used. These control a wider range of grass weeds including ryegrass and wild oats. Pacifica also gives control of annual meadow grass and  black grass, where present. These products also offer useful broad leaf weed control. All have some flexibility should a sequence or tank mix with another ALS herbicide be needed to target other broad leaf weeds. However, none of these can be used for barley. In a Frontier trial researching brome control last season, an autumn application of Unite with an additional residual herbicide such as Omaha (pendimethalin + diflufenican) gave increased levels of brome control when compared to using Unite alone.

Water rates should be between 100 and 200 lts/ha, with the lower volume used only when the crop canopy is open and weeds are small. Nozzle choice is important too and one that delivers a fine to medium spray quality is the ideal. Air induction nozzles tend to deliver medium to coarse sprays and should be avoided when using these products as they can give insufficient coverage of the weeds. If necessary additional tank mixing or sequencing should be given careful consideration as certain products can be antagonistic, reducing the efficacy of the herbicides. Broadway Star has more options for this than Pacifica but it pays to check the approved tank mix/sequence lists carefully.

Work at the Frontier Trials is ongoing. To speak to a member of the Frontier technical team, contact us today.