As harvest progresses, results from Frontier's winter barley 3D thinking trial in Alford in Lincolnshire are in. This trial is to investigate response to fungicide and PGR programmes and although yields and qualities are variable, in line with many farmers' current experience, the results demonstrate that a robust fungicide + PGR strategy has improved yield and, in most varieties, delivered sound commercial benefit.

Christine Lilly, research and technical support manager for Frontier said: "In all, 15 of the 21 varieties trialled showed a cost effective yield response to fungicide/PGR with Belfry, Bazooka, Sunningdale, Surge and Volume responding best.

"Given a price of £100/t a yield response of 1.24 t/ha was required to make the fungicide/PGR programme cost effective. The average response across the whole trial to fungicide and PGR was 2.08t/ha."

Jonathan Hoyland, barley trader for Frontier added: "In terms of the national picture, we've now gathered some 2,000 commercial farm samples and we are seeing variable results with generally lower average specific weights of around 61-62kg and a number of samples as low as 52kg. I've been trading barley for more than two decades and this is the most challenging I can remember for winter barley quality. With regard to variety performance nationally, Cassia appears to be leading followed by Bazooka, Glacier, Tower and Volume."

Ms Lilly adds: "It's hard to predict how markets are going to change throughout the season or indeed if the weather will be kind, but we believe the trial demonstrates that investing in a robust crop protection plan should increase your barley's performance, even in a challenging year."

A winter barley variety trial was drilled as a second cereal at Alford in Lincolnshire on 25th September 2015. Rainfall from October 2015 to end of June 2016 was 480mm.

Establishment was good and the trial received an overall herbicide, nitrogen and sulphur programme as detailed in the appendix. Total N applied was 160 kg/ha and SO3 was 46 kg/ha.

The 3D thinking trial was split into three - a fully fungicide and PGR treated block, fungicide only and untreated. Each block was replicated three times. The cost of the fungicide programme was £95/ha and the PGR programme was £29/ha.

Late season brown rust was the predominant disease at the site with low levels of rhynchosporium, net blotch and ramularia. Lodging and brackling was recorded in both treated and untreated plots. 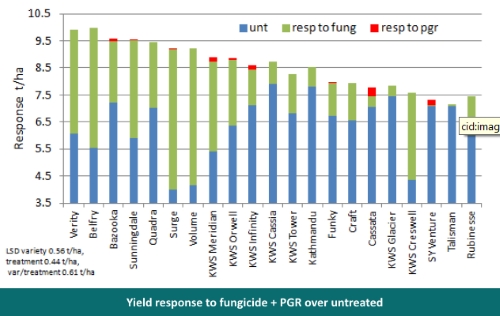 With an untreated mean yield of 6.36 t/ha compared to the treated mean of 8.44 t/ha every variety gave an increase in yield from a fungicide + PGR programme and the untreated block ranked very differently to the treated blocks. Whilst Bazooka remained near the top of the table with one of the highest untreated yields Belfry, Sunningdale, Volume and Surge all dropped to the bottom of the table. These varieties all illustrate how effective the fungicide programme had been.

Lodging was high at the site within the untreated block but was controlled in all but two varieties where fungicide + PGR had been applied. Where only fungicide was applied 13 varieties lodged between 2 - 27% again illustrating the benefits of including a PGR programme.

Brackling was high in the fungicide + PGR treated block but only KWS Glacier and KWS Orwell showed any lodging. There were significant differences between varieties in amount of brackling with Bazooka and Belfry showing less brackling than Quadra and Volume.

Ears/m2 were counted and there were between 400 and 500 heads/m2. The hybrid six row varieties Sunningdale, Belfry, Volume and Bazooka tended to have slightly lower ear numbers than the two row varieties perhaps reflecting the lower seed rate drilled.