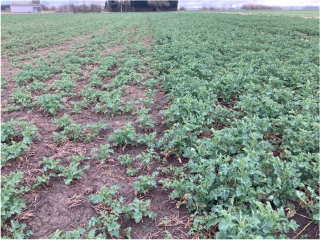 Flail mowing a perfectly good crop of oilseed rape 16 weeks after drilling it? Mowing down a perfectly good crop of oilseed rape in November seems very counterintuitive to most growers. Yet, early indications suggest that this method could reduce cabbage stem flea beetle (CSFB) pressure without using insecticides. 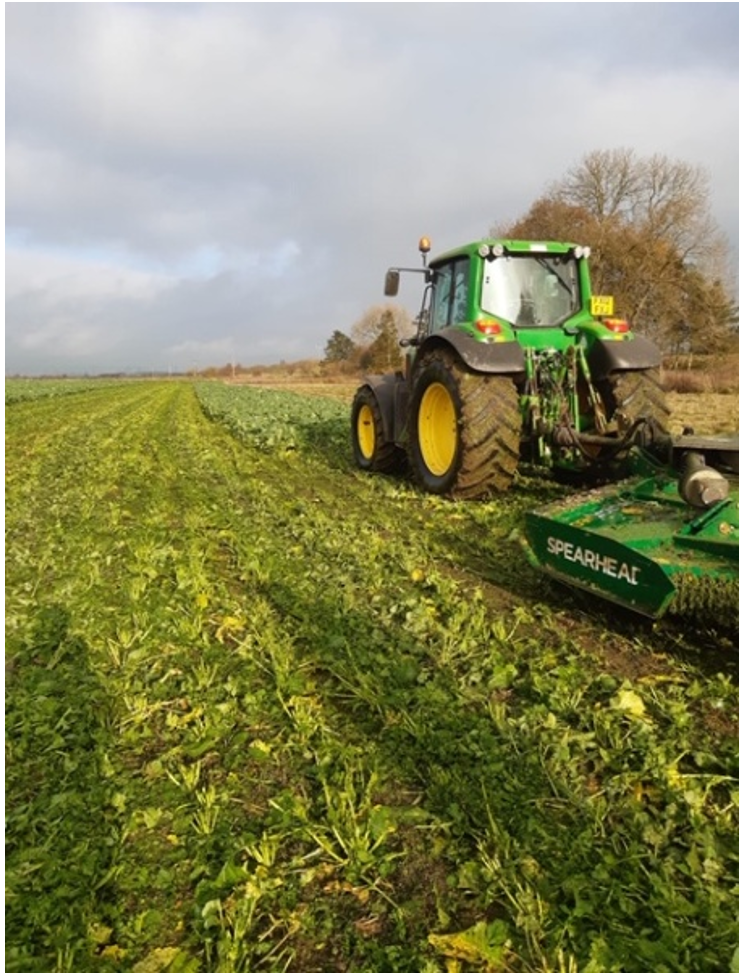 The theory is that by cutting down the crop at 16 weeks post-drilling, the grower will drastically reduce the number of CSFB larvae in the field by removing the leaves in which they manifest while giving the crop time to re-establish before harvest.

I've personally seen this technique tried a number of times in replicated trials and, having seen the results, it inspired confidence that this method was worth trying on a field scale. All I needed, of course, was a very trusting grower with the courage to give it a go!

The subject of reducing CSFB pressure is a popular one amongst growers everywhere, but the suggestion of doing it without the use of insecticides has been a common theme for some time amongst the growers involved in my impartial agronomy group, Crop Dynamics.

However, bringing together the correct elements to test this scenario has taken three years of patient planning.

We know from trials work that to use this technique requires adhering to a number of important crop criteria:

Small late-drilled crops will not have sufficient root and vigour reserves to tolerate this technique.

Our volunteer grower was Crop Dynamics farmer Colin Chappell. He had drilled Aspire oilseed rape at 4kg/ha in July and the crop had established well. We felt confident to test this technique in November. Prior to drilling the crop, Colin had applied liquid digestate. 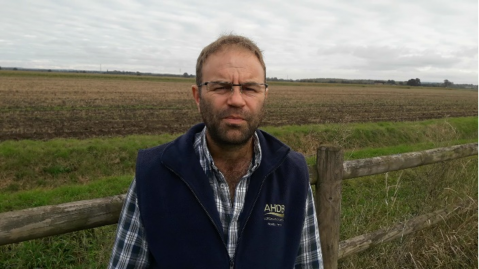 With good seed bed moisture present, the crop established well. By the time it was fail-mowed on the 5th November, the crop had reached a height of 40cm/18" with eight to ten leaves per plant. By this stage, the crop was already carrying a significant level of immature CSFB larvae and had received no insecticides.

When mowing down the crop in November, the aim was to set the mower as low as possible to remove as much top growth as possible; in theory, eliminating as many larvae as possible. The timing was calculated to be as late as we dared in order to reduce the risk of new larval invasion while still giving the crop time for some recovery in late autumn. 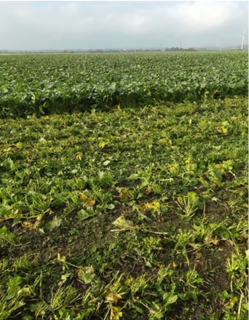 By 30th November, there were clear signs of crop recovery, allowing Mr Chappell and I to breathe a sigh of relief. As the photograph below shows, it was clear that the crop was going to recover well and the most important area of growth, the central rosette, had started to form along with a number of side shoot buds. 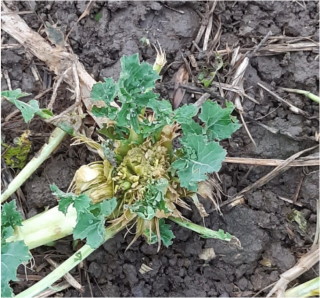 Mowing removed 90% of the original foliage, however some of the larger side leaves had not been removed. This was always going to be inevitable and we were now interested to see what level of larval loading the crop would be carrying post-Christmas.

In late January, we found that the crop had continued to recover well with little plant loss, as seen in the photo below. 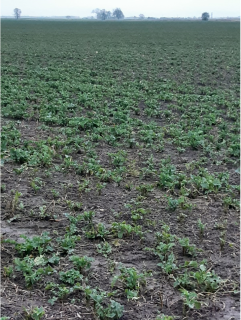 It was key to know the larval loading number in order to find out if this autumn operation had resulted in crop health that was better than if we had not intervened. The photograph below shows just how well individual plants had recovered only nine weeks after mowing. 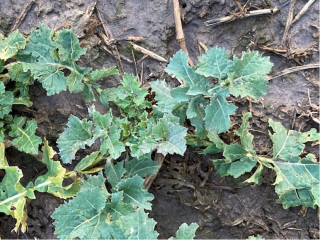 Where mature leaves had not been removed from the plant in the autumn, namely those that had been missed by the mower, a quick assessment showed that the larval count was high. There was evidence of several larvae per plant. In fact, field observations revealed that many of these leaves had six to nine larvae each.

Consider that most plants at the time of mowing had eight to ten leaves per plant and the true figures really start to emerge. With a plant population of 40 plants per square metre, the total number of larvae equates to over 24 million larvae per hectare; and this is a conservative estimate.

When a plant was clear of the older leaves, as shown below, a strong central rosette was produced as well as some strong looking side shoots and a number of side buds yet to develop. 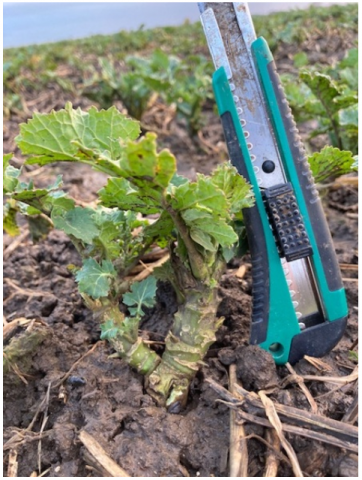 If we compare the main stem and side stem side by side, the fact that some larvae remain cannot be disguised. However, if we look at the growing point on each stem, we can see that at these points, the crop is free of larvae. 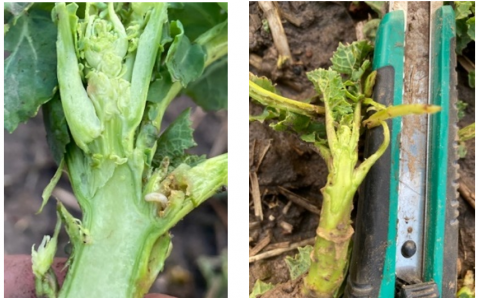 Calculating the larval loading on plants whose leaves were successfully removed we find that, on average, any plant without winter leaves had between 3-4 larvae per plant. If we multiply this figure in the same way as the above example (four larvae per plant multiplied by 40 plants per square metre), we reach a total of 1.6 million larvae per hectare; a reduction in larval loading of over 90%.

There are two immediate upsides to this figure. Firstly, there are far fewer larvae actually attacking the crop during the spring and early stem extension and, in what may turn out to be more important, the longer-term impact is a dramatic reduction in the CSFB population in the field, which will turn out to be the legacy any oilseed rape crops drilling in close location in the autumn of 2021 will be faced with. Clearly from being a larvae in the plant to an adult beetle in the next season there is an element of attrition on the pest from predation by beneficial insects among other environmental factors, however there is a clear indication that there will be fewer beetles from lower larvae numbers.

The image below (from mid-March 2021) shows comparisons between crops mowed down in the autumn and those left untreated. 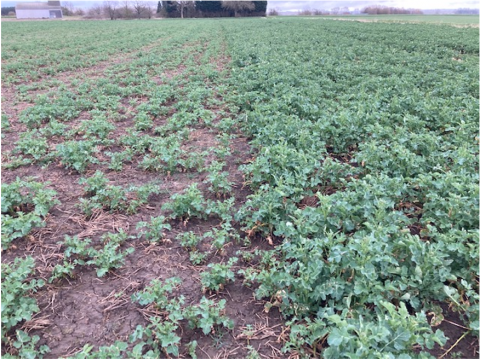 The effect of spring growth on the mowed area is more of a delayed stem extension than reduced biomass production. 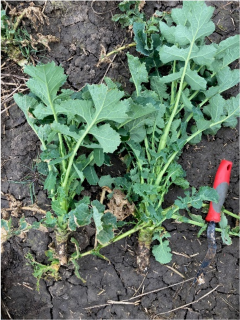 To assess the potential outcome in terms of yield, we need to look towards the results of Frontier's replicated 3D Thinking trials. 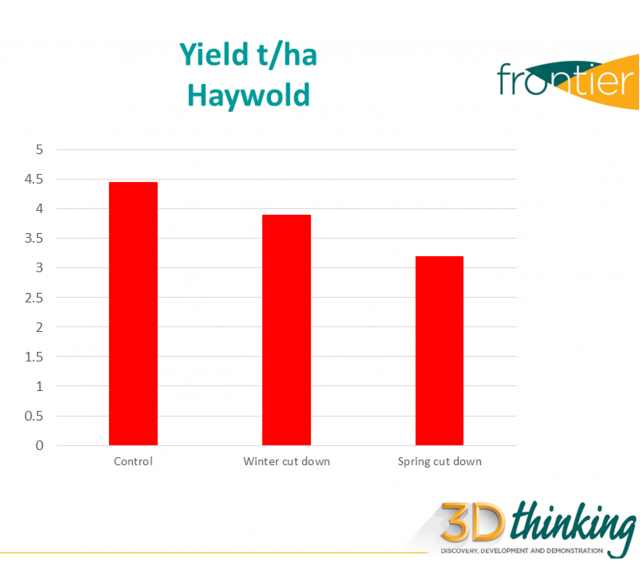 As the table shows, there were yield reductions resulting from both the winter and spring cutdowns, but reductions were particularly evident in the spring.

It was clear from the results that crops could not recover from a reduction in foliar biomass in the spring. Even a strong plant requires a longer time frame to generate a yield-bearing structure come harvest. In addition to the issue of time span is also the problem of the damage already sustained from CSFB over the winter.

Does this mean the technique has no appeal? Personally, I think the small reduction in yield using this method must be offset against the dramatic reduction in larval loading across the field and the subsequent potential to reduce CSFB pressure later in the autumn when growers are hoping to re-establish their oilseeds crops.

Over time, we could speculate that repetition of the cutback method in one area could result in a long-lasting reduction of CSFB in the field, which would ultimately give future oilseed rape crops the best chance of establishing with less CSFB pressure on them.

As is the case with all innovative trials research, the best outcome from this method cannot be quantified or properly assessed in the course of one season. It would be very interesting to implement a similar field-scale trial with a commercial grower over multiple seasons to truly put the technique to the test.

If you'd like to find out more about our 3D Thinking trials or to anything else covered in this blog, please get in touch on 01522 860000. 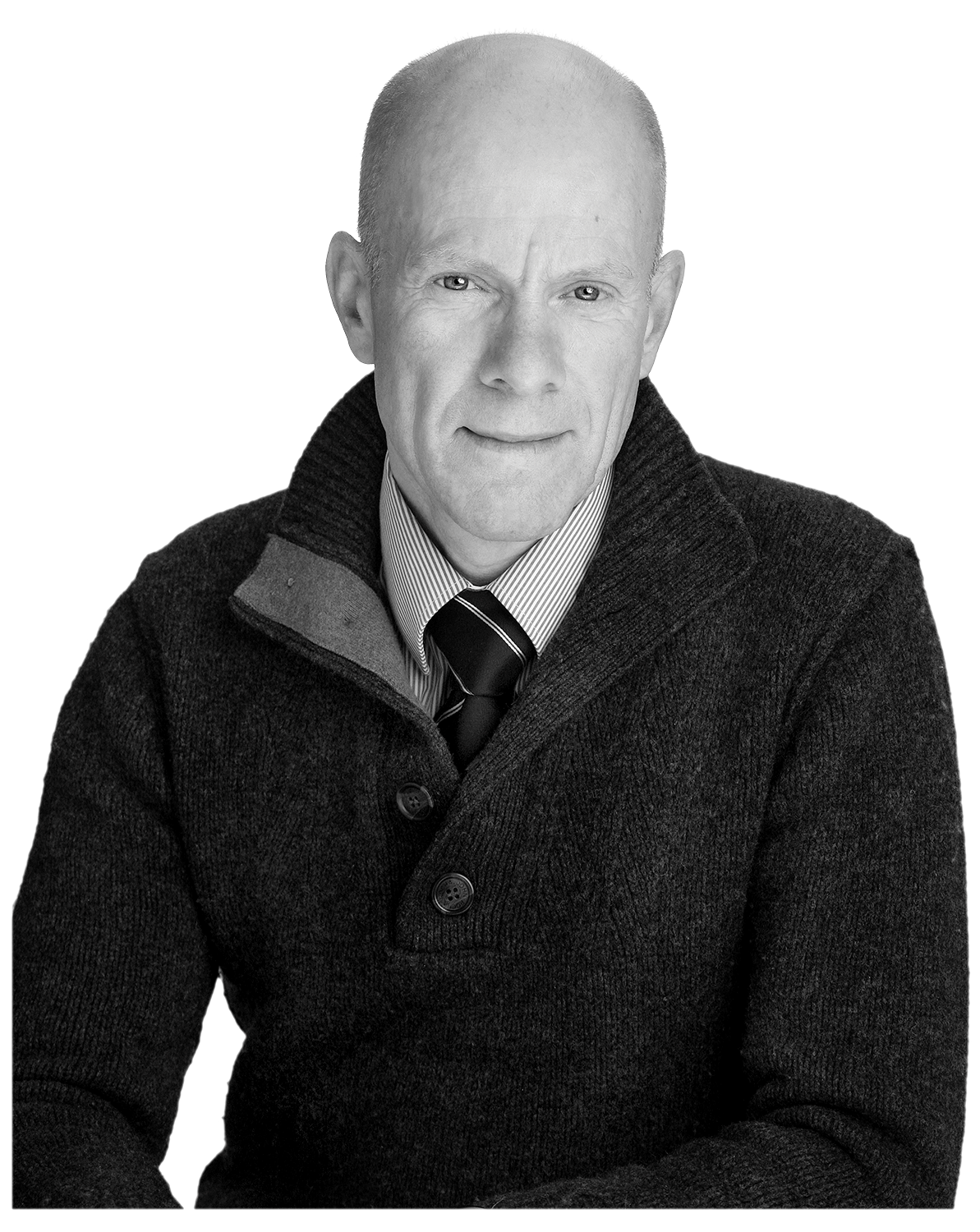