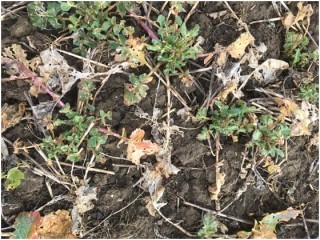 The impact of flea beetle larvae ​As if the adult population of cabbage stem flea beetle (CSFB) wasn't problematic enough last autumn when large areas of oilseed rape were written off, crops are now struggling again as they come out of winter. CSFB larvae are present in high numbers on both heavily grazed crops and even those which appeared to grow away from the pest last year.

It begs the question: How have we ended up at this point? I believe that the CSFB population has grown far beyond where it used to be since the loss of neonicotinoids and this combined with the growing resistance to pyrethroids has made controlling the pest difficult. This level of pressure, alongside near-perfect conditions for prolonged, slow crop growth and a very mild autumn and winter, has fuelled the fire.

Many areas had unseasonably warm conditions and as a result, CSFB adults were still being found in crops right up until December. This has led to an extended period of egg-laying and it seems, judging by the numbers we have now, that most of those eggs ended up in the crop. While counts above ten should be considered a risk, there have been reports of plants with upwards of 50 larvae found which is concerning.

The impact on OSR crops

The damage to the crop initially looks like the old leaves have died off. This is a common sight over the winter as the crop runs out of nitrogen and experiences some degree of natural winter leaf loss. However, on heavily infested crops of oilseed rape the leaf loss is prolonged, with more if not all leaves dying or the plant seemingly refusing to grow away. This can even be the case in the presence of freshly applied nitrogen and warming soils and temperatures.

In reality, there is very little we are currently sure of that can help during this stage of the pest's lifecycle. In fact, I consider the adult to be one pest and the larval stage another altogether, as strategies to help manage the risk of one can lead to increased risk from the other.

However, just because there are no measures in place currently, it does not mean we are idly watching this key break crop die off in the UK. There is a considerable amount of effort being put in to help mitigate the risk for the future.

​What should you do now?

First and foremost, make sure the crop has access to sufficient nutrients i.e. boron, nitrogen, sulphur etc. Here's hoping that the current mild weather also continues and that the crop responds to the changes to day length warmth.

Importantly, it's also worth remembering that while our industry has had its fair of share of challenges, it's had a good number of triumphs too. At one point, black-grass almost made our land entirely unmanageable but, thanks to ever-expanding knowledge, research and innovation, we now know far more about how to try and combat this pernicious weed.

In the same way that we have taken on the battle against black-grass, I'm sure that as an industry will we learn to hold our own in the war against CSFB.