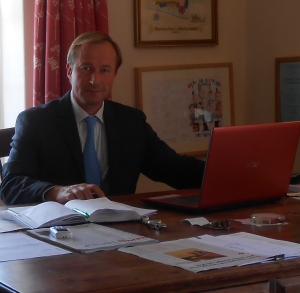 Nomix Enviro, the leading supplier of herbicides to the amenity sector, has announced Richard Johnson as its new commercial director with immediate effect.

Richard's appointment sees him take responsibility for leadership at Nomix and follows the retirement from full time employment of the company's founder and managing director, Mark Phillips after 25 years in the industry.

For the last year Richard has worked as business development manager for Nomix, alongside Mark Phillips, in preparation for his new role and to ensure a seamless changeover.

Mark Aitchison, managing director of Nomix's parent company, Frontier Agriculture, says of the news: "Mark Phillips played a pivotal role in the development of Nomix, creating the innovative company we see today at the forefront of its sector. He also had the vision to lay strong foundations that will help take the company to the next level. Mark led the Nomix team that joined forces with Frontier, a move which will support future investment and growth. Richard's appointment sees the start of the next stage of the company's development.

"Mark leaves us as a good friend. We thank him for his commitment and leadership and wish him well for the future."

Richard will work closely with the existing Nomix sales and management team based in Andover which is also the location of the company's factory and chemistry production facilities.

Richard joined Nomix having previously worked as a director of Albanwise Farming. He also worked in China for five years for Associated British Foods, directing the agricultural development of its sugar and feedstock business. His history of business development and agronomy background will stand him in good stead to lead Nomix in the future.

Speaking of his new appointment, Richard adds: "I am delighted to take on the role of commercial director. Nomix already has a reputation for providing great products backed up by excellent customer service and that's something we're going to build on. Ours is a rapidly changing industry with legislative and environmental compliance becoming increasingly complex but absolutely essential. One of the reasons for Nomix's success has been the advice and solutions that we have provided to help address challenges presented by changes to the law and environmental regulations. This is an area I plan to further develop with my team's help.

"I'd like to thank Mark Phillips for his generous support over the last year which has given me a sound understanding of the sector and of Nomix and our customers."