In the constant battle against disease, two Aberdeenshire growers are taking a different approach to maximise their wheat crop potential. Applying an early SDHI, at T1, as well as at T2 has produced exceptional results, with yields of more than an additional tonne per hectare.

Charlie Catto, the Frontier agronomist that recommended the approach, explains, "Disease pressure was high last year, but growing conditions were otherwise perfect. If you looked after your crops with the correct fungicide programme, yields were tremendous. Triazole efficacy is beginning to decline on septoria, so the additional elements of an SDHI approach are very useful in fighting the disease."

To address this disease pressure, Charlie worked with his growers to apply additional protection and boost green leaf retention. Skyway, which includes prothioconazole, tebuconazole and bixafen, was used at growth stage 32 and acted well against the common diseases of septoria, mildew, eyespot and yellow rust. Ceriax, including epoxiconazole, fluxapyroxad and pyraclostrobin, was then used at flag leaf and again gave fantastic results on septoria control, as well as adding a greening effect and yield increase to the crop. Charlie also added chlorothalonil, a multisite fungicide, to the mix to increase disease control and combat fungicide resistance. He added, "Alternating products and including chlorothalonil is a must. SDHIs have given growers a real step forward in disease control but they need to be protected from resistance." 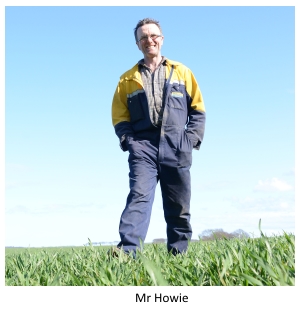 Mr Howie, of A G Howie at West Knock near Peterhead, farms 440 hectares of cereals as well as keeping pedigree sheep and cattle. Having taken Charlie's advice to apply SDHIs at both T1 and T2 to his crops, including Beluga and Horatio, he was more than pleased with the results.

"We certainly had no regrets," he says. "We've had disease issues in the past and the new chemistry worked very well, especially speaking to farmers that didn't use it. We had record yields of wheat and spring barley as a result; it was the first time our wheat has ever averaged over 11t/ha. We'll definitely be taking the same approach this year."

Charlie goes on to explain, "There didn't seem to be much newly active septoria early last year as it was a drier spring. This fooled many into thinking it wasn't an issue in the fast growing crop, but as the season developed, conditions became wetter and warmer which encouraged the fungus to spread rapidly through the canopy."

"Many other growers using the traditional triazole chemistry, without an SDHI at T1, saw a lot of septoria come into the crop before they could apply a T2. Where two SDHIs had been sprayed, the crop was a lot cleaner and there wasn't the same need for an eradicant or the same pressure on the T2 chemistry either. The extra SDHI paid off in improved grain quality, bushel weight and yield."

Mr Campbell, of I & N Campbell, Kirkton, Kinellar also benefitted from the results. Growing wheat, barley and OSR across 400 hectares and three farms, he applied an SDHI to Alchemy and Leeds at T1 as well as T2. 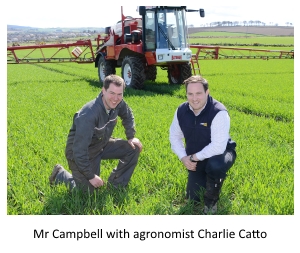 "Because disease pressure was so high, we wanted to keep the crops as clean as possible all the way through," Mr Campbell explains. "We usually leave three weeks between our T1 and T2 and the early SDHI kept the wheat better protected in that period; after the third week it was still holding up well even though disease pressure was high.

"I know some people that only went with an SDHI at T2 and they had to put on a higher rate, spending more money and it's not really worth it because the damage has already been done. The cost of two SDHIs may be higher but it pays for itself.

"It really did pay to look after the crops and make sure they were protected. One of the first things I noticed was the increased bushel weight and there was a great yield difference too, with an extra tonne per hectare. It may be even higher this year."

Frontier's technical and development manager, Stuart Hill agrees, "We have to be preventative with our programmes and mixing several different modes of action will significantly reduce the risk of resistance shifts to any one particular mode of action. Septoria populations are changing and it is well documented that the triazoles provide little curative efficacy now. They still have a position in a protective approach and curative rust situations, so are still valuable. SDHIs have proven themselves and certainly the multisite, such as chlorothalonil, is a must in mixes.

"Frontier trials data supports the T1 use of SDHI compared to a triazole approach. Last year we demonstrated a 1.16 to 1.63 t/ha yield increase under high pressure, equating to an extra £113 - £167/ha margin over input cost."

Both growers were so pleased with the results that they will repeat the same process again this year. In advice to others, Charlie concludes, "A lot of growers are using SDHI at the T2 timing, but I think disease pressure is such that it's necessary to bring it forward into T1 too. Septoria pressure is increasing and often it may be present but not yet visible in the crop. By the time it shows itself, it's a struggle to keep it out and the result is a reduction in yield. I would certainly recommend growers consider this approach."