Frontier customer and Lincolnshire farmer, Tim Lamyman has achieved the world record for the highest winter barley yield with his crop of KWS Tardis, achieving an astounding 14.2t/ha.

The results from Tim’s crop were confirmed after harvesting took place on 5th August. His yield towers over the previous record of 13.8t/ha, achieved in 2015 by New Zealand farmer, Warren Darling.

In what has been a challenging season, efforts to safeguard the barley crop’s yield potential were paramount and Tim worked closely with Frontier agronomists, Ben Mead and Jeremy Nicholson as well as head of innovation, David Robinson and crop production technical lead, Paul Fogg to devise a detailed plan of action.

Tim’s crop of KWS Tardis was drilled as a seed crop for GFP Agriculture - a division of Frontier - on 17th October at a seed rate of 200kg/ha. At the time of drilling, KWS Tardis was a high yielding candidate variety for the 2021 Recommended List before it was eventually added as the top 2-row conventional feed barley. The performance of Tim’s crop demonstrates how newer seed genetics are continuing to increase crop yield potential and it shows the value of moving into a new variety such as KWS Tardis at the earliest opportunity.

“From the beginning, our objective was to make every effort to minimise factors that could lead to reductions in yield,” explains Ben Mead. “We worked with Tim to undertake a lot of planning and monitoring, making sure we were always making recommendations and decisions based on what the crop was telling us”.

“While this meant working to great depths of detail, it allowed Tim to consider a range of agronomic solutions to achieve the best results.”

As with any crop, it was vital that Tim’s barley was given the best start possible. Ben and Jeremy recommended early nitrogen applications to help build biomass and Tim also incorporated autumn micronutrient applications from Bionature using NHK Delta. This combination helped to maximise early rooting, improving plant resilience by increasing access to soil moisture and available nutrients.

Tim explains, “The foundation of my nutrition programme is to enhance the physical rooting structures in the autumn. Incorporating 1-4-All with the second application of Delta in November de-stresses the plant and alleviates a lot of the corrosive yellowing see in many winter barleys in late autumn and early spring.”

Delta K was also applied just before early season spring applications to invigorate the fibrous root mass of the plant, allowing it to capture more nitrogen. To safeguard yield, it was important to make the most of the variety’s potential too. Together, Ben, Jeremy and Tim set a target of 1,000 ears/m2, with a total of 250kg of nitrogen applied to the crop in the spring.

“Knowing the capabilities of KWS Tardis, we were keen to push the crop hard and we are thrilled that Tim was able to meet his target for numbers of ears. It was a big contributor to the overall yield results,” says Ben.

Routine tissue testing was a vital part of the crop’s management too. The data gave Tim accurate and routine insight into his crop’s requirements so that he could base his management decisions on the results. 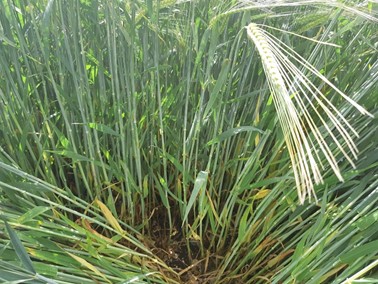 In terms of disease management, Tim’s advanced nutrition strategy was strengthened further by a robust fungicide programme to keep the crop free of disease and to prolong the area of green leaf material. Rather than the usual two-spray approach, Tim adopted a four-spray strategy.

With mildew and rhynchosporium presenting a threat early on, a T0 (GS30) based on prothioconazole was applied. This was followed by the main fungicide spray of fluxapyroxad + pyraclostrobin + prothioconazole at GS31. However, in a bid to rid the crop of ramularia at the earliest possible opportunity, Tim also sprayed at T2 (GS39) with mefentrifluconazole + fluxapyroxad before a final earwash of prothioconazole + azoxystrobin in early June.

Crop nutrition continued to play a key role throughout the season too, with XStress + Cerone (ethephon) applied at the T2 timing to reduce plant stress at a critical time and CalFlux and XStress at T3 to keep the crop greener for longer.

“Tim’s commitment to disease management was excellent and really paid off,” says Ben. “We were still recording four clean green leaves in the crop at the beginning of July which is not a sight commonly associated with a barley crop at that time of year.”

Making a habit of award-winning crops

Ben explains, “It’s excellent working with Tim because he is meticulous with detail. His awards are incredibly well deserved and the work he undertakes means we can share some valuable agronomic learnings with other farmers too.”

“It has been a fantastic experience working with Jeremy and Ben with all the different aspects of nutrition issues and disease problems a season can bring,” says Tim. “Their combined technical knowledge has helped push the boundaries of yield to new heights.

“A special thank you also to David Robinson and Paul Fogg for providing us with incredibly detailed information to help us make these decisions throughout the season.”