Frontier Agriculture dispatched a number of its distinctive bulk haulage vehicles north of the border to help soak up the peak in farmer demand for grain haulage during harvest 2013.

Vehicles from as far afield as Norfolk, Hampshire and Manchester converged on Scotland in an effort to keep Scottish farmers' grain moving.

The 44-tonne trucks, and their drivers, are all usually based in England but for a period of six weeks from the end of August they operated from a base in Newmachar, near Aberdeen.

Jon Duffy, trading director for Frontier says: "The nature of the Scottish malting barley market is such that, unlike England, it requires most barley to be collected from farm and delivered to maltster during harvest. This causes a sharp spike in demand with around 750,000 tonnes of grain requiring movement in just a two month period. This farmer demand for haulage simply can't be met locally which is why we send additional trucks up there to support both local farmers and our regular hauliers at harvest time. This year harvest has been even more concentrated with fine weather and late maturing rape crops leading to an unprecedented cluster of demand for grain movement.

"During the six weeks we have had up to 10 trucks up in Scotland at any one time. For some of our drivers this has meant being away from their own family during that time, working, eating and sleeping in their truck."

Farmer response to the additional supply of haulage has been positive. Kirsty Morton, a trader with Frontier based in Morayshire says: "The response from Scottish farmers has been fantastic. My customers have been really appreciative of this additional haulage availability and have commented on how helpful having these trucks and our drivers on farm during harvest has been."

Local grower, Robert Murray who farms at Cullen in Moray adds: "Having these additional vehicles available from Frontier has saved the day. Without this I would probably have struggled with my short term storage at harvest. We are always looking for lorries in Scotland at this time of year to get our grain moved, so the more trucks available over harvest, the better. As well as grain, I use some of my buildings to store other materials such as straw and better movement at harvest allows me to manage this storage more efficiently."

With harvest 2013 drawing to a close Frontier's fleet of trucks will return to England to take up usual duties but Jon says: "Should the need be there next harvest, we will likely do this again - it's all about adapting our plans to meet our customers' needs." 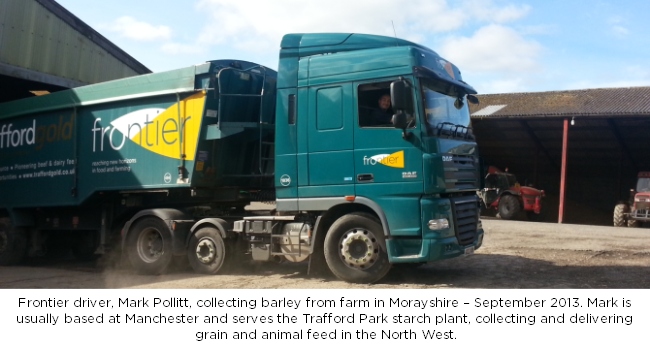