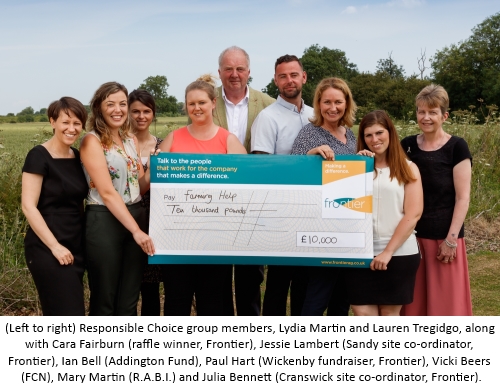 The cheque for £10,000, which will be split evenly between four Farming Help charities, was presented in June at Frontier’s offices in Lincoln.

Frontier colleagues raised £4,602.30 of the cash through fundraising events organised by The Responsible Choice regional coordinators.

The company also committed to donate a penny for every tonne of grain traded during the week. Frontier traded 98,933 tonnes of grain during that week adding another £989 to the total raised.

Sharon Kennett, chair of The Responsible Choice steering group explained: “We knew our colleagues would support The Responsible Choice’s involvement in Mental Health Awareness Week, but their level of commitment was fantastic. They got involved in so many ways and raised so much more than we could ever have hoped for. Frontier therefore made the decision to match their efforts, taking our total donation to £10,000.”

Vicki Beers, fundraising & supporter relationships manager at The Farming Community Network (FCN) and speaking on behalf of Farming Help at the presentation said: “Thank you to Frontier for the warm welcome today and the amazing donation!  It was great to meet some of the people who helped raise the money. The charities that make up Farming Help do great work but rely on the generosity of others in the farming community to do so. We will all put this money to very good use. For example, it costs approximately £330 a day just to run the FCN helpline, a lifeline to people in crisis.”

Sharon concluded: “We’re delighted to make this donation. It’s great to hear it’s going to be spent helping people in need in some very practical ways.”