Frontier on board again for Mental Health Awareness Week 2018

In addition, the number of mental health related charities to benefit has increased for 2018.

Commitment from colleagues and company

For the second year, Frontier has committed to give a penny to charity for every tonne of grain purchased ex-farm from UK growers during the week.  Frontier trades an average of 100,000 tonnes of grain every week, so this quickly stacks up.

Events and charity challenges are organised across Frontier’s UK-wide sites during the week, and beyond.  People are planning on shaving their heads, abseiling from grain silos, organising inter-department quiz nights and bake sales, and even being placed in stocks so colleagues can pay cash to throw wet sponges at them!

And all of this is to raise money for charity and awareness of the importance of looking after our mental health.

Which charities is the Frontier team supporting for #MHAW18?

Following feedback from colleagues last year, Frontier has expanded the number of charities that will share money raised. This year, as well as farming charities, a number of national good causes that support people with mental health problems will benefit.  Money raised in 2018 will be split between:  BEAT, Mind,  Anxiety UK,  Sane,  Addington Fund,  Farming Community Network, RABI and RSABI.

Sharon Kennett, chair of The Responsible Choice steering group says: “The response to Mental Health Awareness Week last year here at Frontier was phenomenal. It really struck a chord with us.  We had a great deal of fun during the week and it helped to raise awareness and start many conversations about mental health issues.  Since last year, we’ve kept that conversation going. We’ve also provided training, professionally delivered by BUPA, for all our line managers to help them spot and support anyone facing mental health challenges.

“This year we expect #MHAW18 to be just as well supported at Frontier and we’re looking forward to getting it underway.”

Frontier’s support of MHAW18 is part of its Responsible Choice commitment. 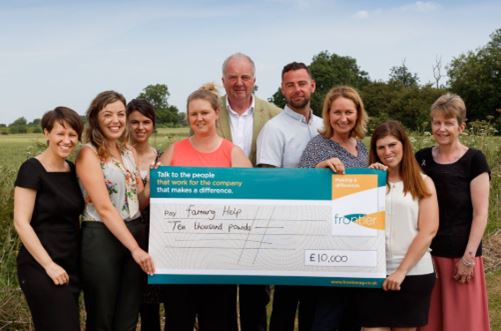 The Frontier’s Responsible Choice team presented £10,000 to charity after #MHAW17