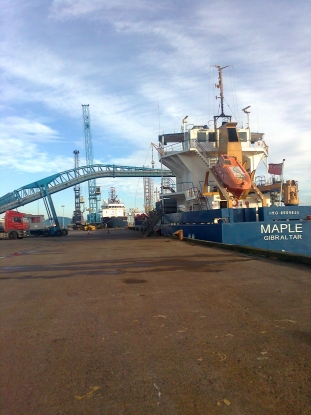 A cargo ship of oilseed rape, organised by Frontier Agriculture, set sail from the Dundee to France last week. The 'Maple', was the second Frontier cargo ship to sail from the port since harvest and had on board 3,114 of oilseed rape. The majority of grain came straight from Frontier's farmers in the region, with the balance taken from company's stores.

Allan Macaulay, oilseed rape trader, for Frontier said: 'The loading of the Maple went well. Over three thousand tonnes of oilseed rape were loaded in just a day and a half, mostly straight from farm. That was good going and everyone had to work particularly hard on Wednesday, taking advantage of the fine weather because Thursday's forecast was so poor. That turned out to be accurate and heavy showers slowed the pace towards the end of loading.'

The Maple sailed from the docks early afternoon on Thursday, 4th November, heading to Rouen, France.

Allan concludes: 'We've a wide variety of markets for our farmers' grain, both export and domestic. We have an extensive shipping programme planned for the coming months, so farmers can expect to see more ships like the Maple taking their grain from Dundee to ports around the world.'