After an extremely cold and wet period across March and early April, it's good to finally see some warm and dry weather. In fact, we had the warmest April day for nearly 70 years, so the change in forecast has been quite remarkable to say the least.

This has been great for crop growth and has allowed significant amounts of spring crops to be drilled.However, warm and dry conditions can pose a challenge for urea fertiliser users.

Warmer temperatures can increase nitrogen losses, causing some of the nitrogen within urea to escape as ammonia gas, a process known as ammonia volatilisation. The risk is now very high with these current high temperatures and it is made worse by the fact that many growers are having to apply larger doses of nitrogen to make up for lost time due to the weather. Higher doses of urea increase the risk of volatilisation meaning there is even more susceptible to being lost.

Solid urea users have been able to significantly reduce this risk associated with later applications by switching to ammonium nitrate fertiliser and, in more recent years, to treated urea.

In the latter, the treatment contains an inhibitor which temporarily restrains the urease enzyme, slowing down the conversion of urea to ammonium and controlling it over a few days. This means there is less risk of ammonia volatilisation and therefore more nitrogen available to promote crop growth and yield.

However, a significant amount of urea is still in danger of being lost from late spring and summer applications of liquid fertiliser. Finally though, there is now a way to reduce this risk.

​Frontier has just launched N-Protect, an additive that can be mixed with all liquid fertiliser grades to mitigate any losses.It contains an inhibitor that works in exactly the same way as that with solid urea, controlling the conversion to reduce volatilisation and safeguard nitrogen.

To use, the material is simply mixed in with the liquid fertiliser during sprayer-filling when there is a perceived risk of volatilisation losses.The risk is greater for warm, dry soils and those with a high pH, as well as for spring crops with little or no canopy cover to prevent the soil surface from drying out.

Over the last two years, replicated trials at Frontier have shown potential yield benefits of between 0.2-0.3t/ha in a number of different crops by using N-Protect.When you consider this against a cost of only £3-6/ha thanks to a very low use-rate, there is the potential for significant returns.The exact use rate is linked to the amount of urea applied, so it changes with the grade of liquid fertiliser and nitrogen rate. 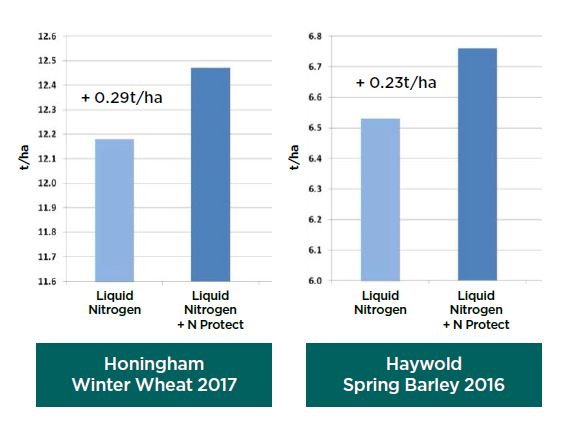 If you are a grower using liquid fertiliser, you now have a very flexible, efficient and low-cost method to manage the risk of any volatilisation losses, leaving you to take full advantage of all the other benefits the liquid system brings.

For more information about N-Protect and advice on how it might work for your farm, speak to your Frontier contact or get in touch with us here.

How will variable rate nitrogen affect my sulphur applications?

Timing, species and methods: Considerations if you're destroying your cover crop

'Farming is changing': The end of the BPS era