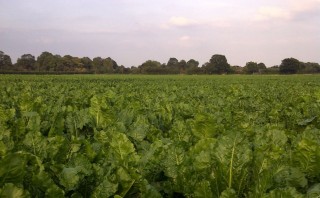 What to do now as we approach the beet lifting season? Planting of the 2018 beet crop was delayed by wet soils, with most crops going into the ground in April. Ironically, what happened next was then dependent on whether or not the seedbed had sufficient moisture for establishment.

Some crops had good levels of moisture and warmth to set a good plant stand and grow away quickly to cover the ground. Conversely, the establishment of many others was impacted by dry seedbeds, followed quickly by the onset of the summer drought. This difference was exacerbated when the sustained period of unusually high temperatures hit.

As we now approach lifting season, British Sugar has assessed the results of their usual pre-harvest yield digs and has decided to amend factory opening dates:

Clearly, this highlights that a significant area of beet needs more growing time, especially in the North and the East of the growing area.

It is a well known fact that late lifting increases yield but, given the disparities between crops, what should be considered when deciding which to lift first?

Late season disease limits yield gained from late lifting. British Beet Research Organisation (BBRO) trials have clearly shown how disease re-establishes as the effect of each fungicide spray wears off through the season.

The fungicide programmes we commonly apply keep disease out of crops lifted into early winter. However, if the decision is made to leave crops in the ground further into winter, disease control has to be extended by applying an additional fungicide. See the BBRO trial results below. 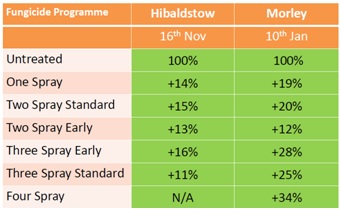 In 2018, if you are leaving crop in the ground for longer than usual to maximise tonnage, adjust fungicide programmes accordingly to ensure you do not lose yield.

For much advice or technical information related to any of the above, please get in touch with us here.

More posts from author
Friday, 21 September 2018 What to do now as we approach the beet lifting season?