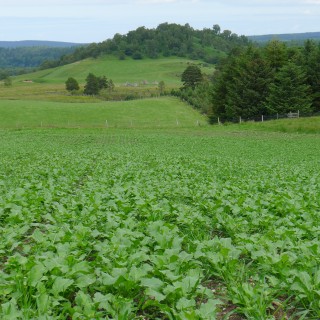 With the environmental and agronomic benefits they bring, it is not surprising that cover crops have become increasingly popular throughout the UK.

However in Scotland, thanks to cooler climates and the later harvest of cereal crops, the use of over-winter cover crops poses a particular challenge. For example In Tayside, spring barley will typically be harvested in September which leaves very little time before the onset of winter for cover crops to be planted, germinate, emerge and establish while the soil is sufficiently warm.

To investigate whether cover crops could be established and to quantify the benefits and effects of such crops on soil conditions, Kings commissioned a three-year trial at Balruddery Research Farm, part of the James Hutton Institute.

Starting in September 2015, the experiment is being conducted in a field with sandy silt loam soil covering a block of 6.9ha. A replicated trial was designed, with a control of stubble from the previous barley crop remaining on the soil surface and seven additional treatments:

The control and treatments were replicated three times in a randomised block design, with sowing in a six metre-wide strip approximately 200 metres long. The soil was cultivated on 14th September 2015 to 100mm depth using SUMO min-till equipment and the covers were sown immediately after using an Amazon combination drill. 30kg of nitrogen, 5.4kg of phosphate and 19kg of potash were placed alongside the seed. 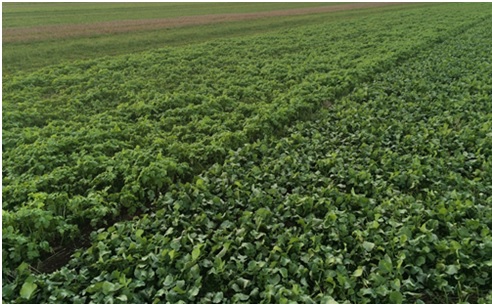 Analysis by Fourier Transform Infrared Spectroscopy (FTIR) indicated that following a cover crop which included a legume, the soil had greater organic matter with some differences in chemical composition. As part of the trial, the analysis is repeated each year to monitor the impact to the soil legacy on a continuous basis.

The winter of 2016/17 was very different to the one before, with rainfall generally below average and only February and March 2017 approaching monthly mean values. The soil water status was monitored in the same way as the previous winter, but there were some important differences.

Overall, the soil was consistently drier at the surface than at depth, which aligned with the 2015/16 data.However, the soil was especially drier under all the cover crop treatments than under the control stubble.For example, the Defender Oil Radish and the Vitality Mix were driest at 10cm and Jupiter Turnip Rape at 20cm.It is probably to be expected given the plants transpiring water from the soil. The differences between treatments are likely due to the disparity in root mass and activity at the various depths.

Before any assumptions are made however, further studies are needed to see whether these patterns occur in our third year of the trial. 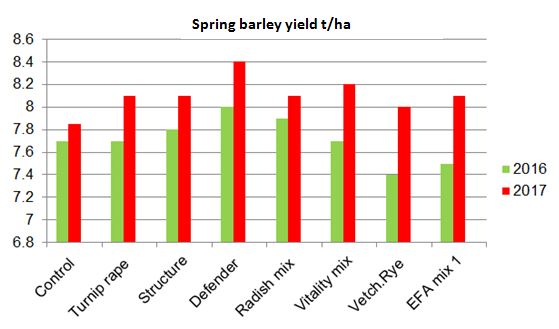 In the graph opposite, there is a significant difference in mean barley yield between 2016 and 2017, with an increase of more than 45kg per plot.

This can be attributed to growing conditions being much better in 2017 than 2016. There is, however, no significant difference between the treatment means and no year-by-treatment interaction.In both 2016 and 2017, the barley yield is greatest where the cover crop was Defender Oil Radish.While not significantly different, this suggests that extra monitoring of some growth parameters may be warranted in 2018.

Conclusions so far and next steps

So far, the impact of a range of cover crops for two consecutive seasons is showing some interesting differences.The varied responses between in-soil water status and un-drained shear strength suggest that an extra year of data will be invaluable in formulating recommendations and conclusions.

In the meantime, outcomes from other tests are becoming clearer with no evidence that slugs are likely to cause problems for cereal or other crops following the cover crops tested here.Also, while the barley results are not significantly different, they do hold the potential to have agronomic importance.

The trial has now entered into its third and final year. At this point next year, we will be able to see the full trial results and look forward to sharing any further interesting and statistical information with our growers in Scotland.

For more information on the above research and other trial work, visit your local 3D Thinking in Action open day. We will be on site to guide you around a variety of Kings plots and explain the proven results of our research, in conditions representative of your own farm.

You can find more information about local events and book your place here. 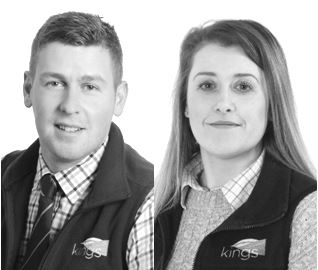 For specific advice for your business related to this blog or any other aspect of crop production get in touch with Kings.