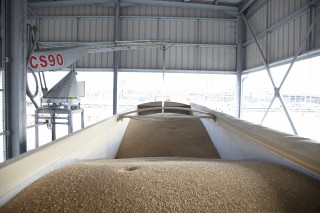 While many of us enjoyed the Easter weekend weather, both winter and spring crops were looking very thirsty as the British Isles broke temperature records. However, with rain now in the forecast and the weather pattern changing both here and in much of Western Europe, wheat futures markets started the working week with a bump lower.

Concerns that the prolonged dry warm spell could impact on yields eased in line with prices for both old and new crop, and bearish sentiment looks likely to hang over the market – at least for the short term. How much rain we get in the UK and how beneficial it will be for crops remains to be seen. Will some of the driest areas of Europe, Eastern Germany, Poland and the Black Sea see rain also? If not, concerns will creep back into the markets and add support to prices. Wheat crop conditions in France slipped two points on the week to 18th April to 81% good to excellent, although this was still three points up on the same time last year.

The big driver for lower world cereal prices has been the selling pressure seen from the speculative funds, particularly in the CBOT corn futures markets. Improving corn crop prospects in South America and expectations for a larger corn crop and a poor US export pace have encouraged heavy selling and record short positions. Even the extensive flooding in the Midwest failed to galvanise any notable short covering and at the beginning of this week the fund sold heavily again, selling 21,000 contracts and hitting a new record short position estimated to be close to 350,000 contracts. That represents over 47 million tonnes and a recipe for volatility if the weather doesn't play ball.