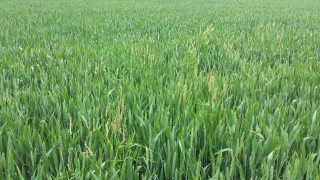 ​Last month we published the first in our series of blogs on grassweed management, looking specifically at black-grass, its characteristics and the strategies to take pre-harvest. You can read the blog here.

As with management before harvest, efforts to control grassweeds are crucial post-harvest too. Cultivation strategies during this time can have a significant impact on the overall grassweed burden for the following crop, but it is important to understand the biology of the individual species in order to use cultural options to the best effect.

As covered in our first blog, most black-grass seeds are shed between June and August, with the majority shed prior to the harvest of winter wheat.

Seeds have a relatively short period of innate dormancy (several weeks), although this is often reduced when seeds mature under hot and dry conditions. If left uncontrolled, populations can increase rapidly – by over 30 fold per annum. The survival of buried seeds in the soil is about 20-30% per year, therefore, after three years of burial, around only 1-3% of seeds will still be viable. Of course, this figure may still represent a considerable number of seeds.

Black-grass plants can only emerge successfully from seeds which have been retained within the top 5cm of soil1. It is because of this that minimum tillage can be seen to encourage the weed.

Provided there is sufficient moisture, about 80% of black-grass germination and emergence occurs in the autumn from September to November. Consequently, black-grass is more commonly associated with autumn-sown crops, particularly cereals. Spring-sown crops, on the other hand, tend to be less vulnerable as the majority of weed plants will have already emerged before sowing. Often, they can be destroyed by seedbed cultivations or use of a total herbicide, however, early sowing or cultivations which are particularly intensive can result in serious spring crop infestations.

If there is adequate soil moisture for germination, cultivate and create a stale seedbed as soon as possible after harvest.

If soil conditions are dry, leave the soil untouched for as long as possible or until the soil has started to return towards field capacity. If you are going into a spring crop, it is best to cultivate in the autumn and then leave untouched prior to spraying off in the spring. After this, aim to drill but with minimal soil disturbance.

Brome infestations can be challenging and, as with black-grass, can impact yield considerably if left unchecked. For example, five plants/m2 can amount to as much as a 5% loss in yield for cereals2.

There are five key species of brome which can impact crops and identification at this time of the year is important as it impacts on both cultural control approaches (post-harvest cultivation), as well as herbicide label claims with regards to efficacy. Bromes can be extremely competitive – similar to ryegrass and wild oats.

Barren/Sterile and Great brome are winter annuals and require vernalisation. Both germinate in the dark, with prolonged exposure to light triggering dormancy.

In instances where these species are the primary problem, aim to shallow cultivate stubbles to avoid any seed being left on the soil surface and exposed to light.

Conversely, Meadow, Rye and Soft brome need to ripen after being shed and require light to germinate. Cultivation will induce dormancy and the seed can remain viable for between seven to ten years. Where these bromes are the primary target, leave stubbles uncultivated for at least four weeks.

In the same way that bromes are challenging, ryegrass can also result in a 5% yield loss if plants are typically five per m2.3

It also produces more tillers than black-grass. While each black-grass plant has 2-20 heads with approximately 100 seeds, ryegrass boasts 20 heads and around 5,000 seeds.

The plant tends to have low innate dormancy but germination can be protracted depending on available soil moisture.
Unfortunately, resistance appears to be widespread so the stubble management strategy adopted for black-grass should be used for ryegrass too. 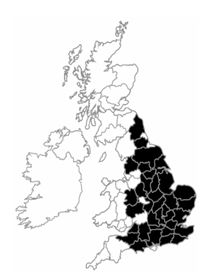 There are two species which commonly occur in arable crops:

Wild oats are competitive, with one plant/m2 leading to a 1% loss in yield. It produces around 75 seeds per head with seed remaining viable for up to 10 years, although this is less in cultivated land.

Germination is usually triggered by a combination of suitable temperature – above 6⁰C – and adequate moisture levels. Most seeds germinate from the top 10cm of soil, with germination becoming limited if the seed is much deeper. Wild oat does show resistance, as outlined in the map below. 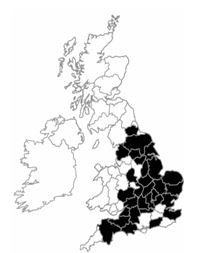 Melander et al., 2003 reported on the optimum stubble management strategies to reduce infestation from newly shed annual grass weeds, Table 1. Remember: it is important to also consider where seed from previous years is buried, as well as available soil moisture.

​*The authors suggest cultivating early for Soft brome. However, it is reported elsewhere that early cultivation in Meadow, Rye and Soft brome species can delay the breaking of dormancy, making effective pre-drilling control and subsequent herbicide timing difficult. As mentioned above, the general advice for this species is to delay cultivation for at least a month following harvest.

Post-harvest cultivations should consist of a shallow disturbance of the top soil, ideally 5cm or less, followed by consolidation with a press or with rolls to conserve moisture and to try and create optimum conditions for seed to germinate.

The control of some broadleaved weeds, such as volunteer oilseed rape and annual nettle in stubbles, has often been a challenge with existing straight glyphosate formulations. The addition of 2,4-D, as found in Kyleo for example (160g/l 2,4-D + 240g/l glyphosate) has improved efficacy against these species.

Carfentrazone-ethyl can also be used on all edible and non-edible crops prior to planting a subsequent crop. It should be tank mixed with glyphosate to broaden broadleaved weed activity, e.g. cleavers, cranes-bill and willowherb. Keep the carfentrazone-ethyl:glyphosate ratio around 1:50 whenever they are mixed, so 0.3L/ha Spotlight + 3.0l/ha glyphosate (if a 360g/l formulation).

Take advice as you plan your post-harvest cultivation strategies

To ensure you take the best possible action against the threat of grassweeds after harvest, above all it's important to carry out initial assessments so you know the full extent of the weed challenge you might be facing. Knowing your target now means that you can put the most effective measures in place to aid with control at the earliest opportunity, giving your following crop the best chance for a clean start.

For more information about anything covered above, or if you would like further advice or recommendations about the weed species on your farm, please speak to your local Frontier contact or get in touch.