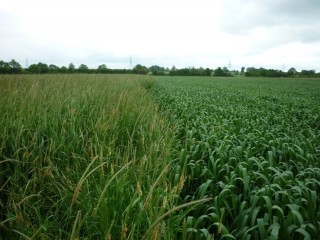 Is it too early to start or too late to begin?

The quandary over when drilling winter wheat in the winter should be replaced by spring wheat in the spring, or when spring wheat should be drilled in the winter continues to surface at this time of year. The answer may not revolve around the cultivar but more around the reasons for the discussion. If we knew that black-grass was no longer going to germinate we could then safely address the technical reason for drilling spring and winter wheat outside their respective season norms.

20 years ago our main rivals for the world record wheat yield in the southern hemisphere, (New Zealand) only drilled what we would class as spring wheat. However, once introduced to the concept of true winter wheats (that is wheat varieties that require a vernalisation phase before they can move into a reproduction phase of growth - those drilled in the autumn by UK farmers) they have found that early drilling with no pernicious grass weeds and little moisture stress in the summer has resulted in a sensational uplift to wheat production.

I remember speaking at farmer meetings on the New Zealand Canterbury plains in January (midsummer) when the discussion was around the latest concept of using a three-spray program to get 10t/ha. It was a déjà vu moment as it felt just like a re-run of the UK's 10 tonne club era with all of the excitement that created. It reminded me of a statement made to me in my early R&D days, if you stand still long enough, son, in our industry you become a pioneer. The field meeting ended as most did in NZ with a debate on how to eliminate the Brushtail possum population. These pests were an import from Australia around 100 years ago and it is estimated there are now more than 30 million of them in NZ.

The change from those golden days of early drilling for many growers in the UK has been our ability to make black-grass feel as at home in the UK as the Brushtail possum now is in NZ. Like those guys on the Canterbury plains the UK farmer has long debated what could be done about the invader and for very many a plan of attack has started. Therefore, early drilling at low seed rates is a much less sexy topic than it once was. Telling your neighbours in the bar on the 5th of September that your winter wheat drilling is complete would be seen as stepping off the cliff edge with just one outcome!

Late drilling is now a key component to successful wheat growing in areas of the UK afflicted by black-grass but for many there is a transition from what is 'too late for winter wheat' but 'too early for its counterpart spring wheat'. However, where is that fine line and how certain can we be? In which case, why not just drill spring wheat in the autumn?

For those who have always been obliged to drill late after root crops this debate has been very important. Trials have shown that true winter wheat types tend to predominate the yield table until drilled after the shortest day of the year at which point the tide starts to turn increasingly in favour of true spring wheats. In fact, as the day length increases and the temperatures go up the threat of insufficient vernalisation dominates the whole process with many true winter wheats at risk from late January of not having sufficient vernalsation time to produce an ear. Fields of wheat grass with no ear really have a marked impact on profitability, particularly if subjected to an expensive three-spray fungicide program.

There will always be the season when spring wheat drilled in December out performs true winter types but experience dictates that is occasional luck rather than the norm. In order to reduce risk, avoid drilling true winter wheat too late and resist the temptation to drill spring wheat too early.

For those reading this, and who can still plan to finish autumn drilling by late September with a smug feeling that the black-grass debate belongs solely to their colleagues in the south, well maybe you should be on the lookout for possums!