The United States Department of Agriculture (USDA) published their September World Supply and Demand estimates on Thursday; it came with minor changes from the previous report and therefore no surprises. There were small cuts in world production for both wheat and corn, but increases in carry-in stocks and cuts in consumption left year-end stocks only slightly lower. As a result, although it was supportive, there was minimal market impact.

Wheat cuts in last season's consumption resulted in the carry-in stocks increasing by 1.75 million tonnes. We expected to see the USDA account for the prolonged dry conditions in Australia and, in line with other analysts, they cut their production by 2 million tonnes to 19 million tonnes. Production was also lowered for Russia, Ukraine and Kazakhstan but offset to a degree by increases for EU-28 and India. Overall, world production is down 2.5 million tonnes on last month. However, this is a notable 35 million tonnes up on last year at a record 765 million tonnes.

High yielding wheat crops and concerns over the Brexit impact have seen significant volumes of wheat being sold from the farm during this harvest period. Data supplied by the AHDB confirmed that farmers had sold over 88,000 tonnes of spot wheat last week; more than any weekly period since the 2000 season.

Record and near record crops for many Northern Hemisphere producers are leading to fierce competition in export markets. Ukraine wheat exports were over 3.5 million tonnes in August and Russia shipped over 4.8 million tonnes more than any previous August.

Harvest continues to rumble on in Scotland, nearing completion in the south but there is still 25-40% to cut north of the Forth. Both yields and nitrogen remain good at this stage of the season but we are continuing to see variations in both germination and skinning results.

The short term barley market is still focused on executing existing export sales as a lack of available elevator space before the end of October limits new trading opportunities before Brexit. Firmer sterling against both the euro and the US dollar is also reducing the competitiveness of UK exports in both the European and world markets. In the longer term, consumer demand for feed barley is limited due to the significant volume of forage produced on farm throughout the year.

The latest USDA report had a negligible impact on US corn markets and, coincidently, barley markets as reductions of US corn yields and production were well in line with trade estimates. 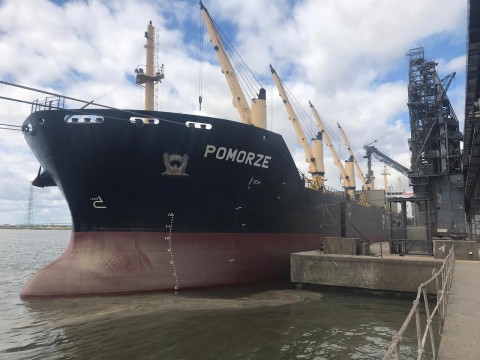 The main event in European rapeseed markets this week was the release of the monthly Stratégie Grains report with what is likely to be their final estimates for EU production. They trimmed the crop by a further 350,000 tonnes from their August figure, giving an overall output of 17.05 million tonnes which is down nearly 15% from the previous year. This crop figure represents a 13-year low and is expected to trigger record import levels, with Ukraine and Canada likely to be the standout origins. EU demand is expected to be robust and the report predicted that the strong performance of OSR prices, compared to cereal markets in particular, could well continue.

Domestic prices have shown little movement over the course of the week. The size of the European harvest was well known prior to the Stratégie Grains report and UK prices are already trading close to import parity levels. Our market is therefore linked to the fortunes of the global market.

US soybean prices have dropped by 7% over the past three months as the US/China trade dispute has rumbled on. China announced this week that it has concluded a bilateral trade deal with Argentina which will allow it to import Argentinean soymeal for the first time. This is further evidence of China expanding its footprint in Latin American countries.

Yesterday's USDA report was supportive to the market, despite US soybean yields and production numbers coming in at levels above trade expectations. There is some concern that yields will be revised down and doubt about how the report addressed the problem of the 6 million acres that had failed to form pods by last weekend. However, it was talk of a possible partial-China trade deal and confirmation that bean sales to China are currently sitting at an unexpectedly high level of 1.17 million tonnes that buoyed prices.

As the bean harvest moves north the pattern of strong yields is continuing, which in turn is putting pressure on feed values. Currently the market is being held up by short covering for export sales made earlier in the season but the lack of strong demand into the fish and compounder sectors is a concern going forward.

Relative to last year the human consumption premiums are lower which limits the ability of processors to upgrade parcels that are marginal on quality. The bigger crop will therefore need to find demand from somewhere but we are starting to see the first signs of interest from the domestic compounder, although, this demand will be very price sensitive. Imported peas are a ready alternative to beans and values have been dropping recently in line with firming sterling.

Global urea markets bounced back up by $18/t, with European traders buying most of the tonnage offered by the North African producers. Other larger regions will be buying shortly but unless we see a change in exchange rates between sterling and the US dollar, it's hard to envision a change from today's levels.

With the rebound in the urea markets coupled with a tight European supply situation in relation to ammonium nitrate, we could soon see CF Fertilisers post forward prices. However, CF Fertilisers will want to keep the UK competitive and sell all the increased product it now has available.

Yara have already posted November terms at £16/t higher than October so the big question now is whether CF Fertilisers will follow. Growers are advised to look at N and NS grades over the next few days and discuss requirements with a Frontier representative.

Phosphate and potash markets dipped a little this week on the back of better exchange rates and this has had a knock-on effect in the PK markets. Growers looking to replace P&K off-take should look at requirements very soon and book products; this current drop is slightly artificial in the UK as predicted replacement costs are higher and are totally affected by exchange rates.

Sulphur requirements are still being finalised but activity has increased again this week. Some products are already tight in supply – please talk with your Frontier representative to discuss Sulphur Gold Compound 29N 20so3 and the best options for your cropping plan.

Has tram lining weed seed brought something new to the party when it comes to black-grass management?